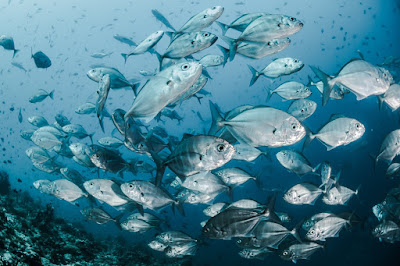 The Pacific Ocean provides a home to nearly 60% of the world's tuna and serves the $22 billion tuna fishing industry. It's an industry that is both lucrative and wildly controversial.

Back in 2015, Greenpeace shared "The Videos the Tuna Industry Doesn't Want You to See." Exposing both rampant human rights abuses and corporate inaction, they encouraged consumers to begin "questioning where [their] tuna comes from" and demand a change from leading providers. A recent report from the UK-based Business and Human Rights Resource Center (BHRRC) suggests progress has been slow.

The international watchdog organization reached out to 35 retailers (including Walmart and Tesco) and canned tuna providers (including Bumble Bee Foods and Thai Union) between November 2018 and January 2019. These organizations represent 80 brands of the pantry staple. Only 20 responded with details regarding their approach to human rights concerns liked forced labor. Those who did respond did little to inspire confidence.

BHRRC's Pacific researcher Amy Sinclair elaborates, "Modern slavery is endemic in the fishing industry, where the tuna supply chain is remote, complex and opague. Yet despite years of shocking abuses being exposed, tuna companies are taking little action to protect workers."

Two-thirds of respondents have established corporate policies for upholding human rights. Just four, however, could speak to due diligence policies related to addressing modern slavery in particular. "Without any action to address abuses," says BHRRC's executive director, Phil Bloomer, "those policies are little more than window dressing."

Not one company reported an example of modern slavery across their supply chain. Bloomer and his colleagues suggests this reflects a lack of attention rather than the absence of illegal activity. While respondents detailed their efforts to conduct human rights training, trace fish digitally, and conduct social audits, the use of third-party recruitment agencies still presents a major problem. According to The Guardian, "Agencies often charge high recruitment fees, which can force migrant workers into debt bondage, a form of modern slavery."

While eye-opening, the results of the survey are not surprising to industry commentators. The Environmental Justice Foundation's Steve Trent remarks, "Although disappointing, these findings do not surprise me in the least. It has been abundantly clear for some the time that more must be done, and must be done now." In particular, he calls for greater collaboration to boost both accountability and transparency.

It's clear that simply pointing to a written policy or paying lip service to human rights action won't cut it anymore. Though BHRRC places the onus of addressing modern slavery on corporations, governments, and civil society organizations, consumers have work ahead of them as well. For shoppers across the globe, it's time to answer Greenpeace's call to action and hold providers to a higher standard.
Trending