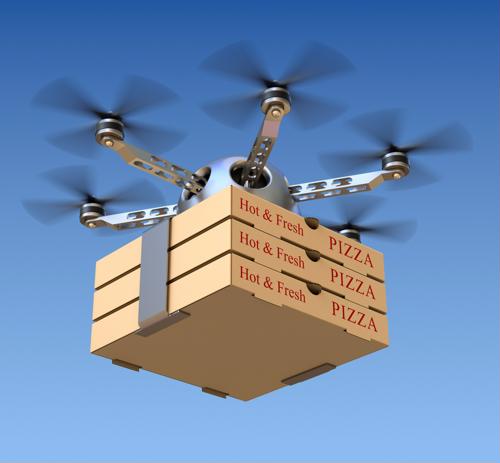 How much should you tip an unmanned aircraft for delivering your pizza?

While it may be a bit early to start asking that particular etiquette question, Uber Eats has announced a new pilot program that appears to be putting us on a path towards a future full of flying, robotic delivery boys.

This summer, the food delivery service will begin using drones to deliver food in San Diego, as it experiments with the most efficient ways to connect takeout orders to customers living in dense urban environments where it's hard to find a direct flight path to the front door.

In fact, for now, the drones won't be ringing any doorbells, instead fulfilling "middle mile" delivery needs. The plan is for a restaurant to load a meal onto an Uber Eats drone, and for the drone in turn to fly to a staging location where an Uber Eats courier can pick it up and carry it the last mile to the customer. In some cases, the company says it also plans to land drones on the roofs of Uber Eats cars that feature an identifying QR code.

The test program is a collaboration between Uber Eats and Uber Elevate, the company's urban air mobility division. San Diego was chosen because the company feels it's important to learn how drone delivery will work in dense urban environments, which is where 68% of the world's population is expected to live by 2050, according to Forbes.

"We don't need to get drones direct to our customer; we just have to get it close," Luke Fischer, Uber Elevate's head of flight operations, said during a recent Uber Elevate conference.

In May, Uber made a few initial test deliveries, using an off-the-shelf AR200 drone to fly some meals from a McDonald's location to the campus of San Diego State University. For this new experiment, the company will use a drone it built to be customized for food delivery.

Perhaps the biggest question to be answered by this experiment is whether such a system actually proves effective in cutting costs, especially since human couriers are still involved in the process. While it certainly sounds like one of the most futuristic middle mile solutions around, it may not be the most profitable.
Procurement News