How the Volatile Trucking Industry Is Impacting Your Supply Chain 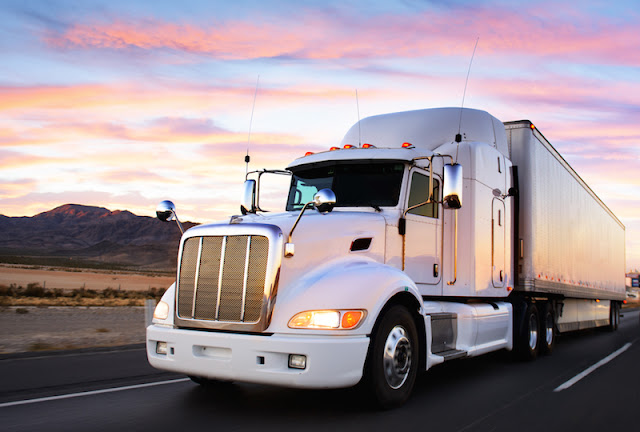 In Q3 of 2017 the trucking industry’s rates began to skyrocket. Trucking companies could not honor their contractual rates/commitments and the prices for spot market shipping rose 30%.

A perfect storm of conditions had the market in disarray:
While these factors disrupted the transportation market that year, and companies of all kinds began outpouring cash just to get their shipments moved, some would argue the tighter capacity and inflated rates that resulted were all business as usual for the trucking industry. Coyote Logistics, a UPS Company and top 50 United States 3PL company in regards to revenue, released a white paper in Q2 of 2018 detailing the current market and how it was due for a major turn. The company’s Coyote Curve analyzes three concurrent cycles – seasonal demand (produce season), annual procurement (RFPs, RFQs, etc.) and market capacity (trucks available in the market).

They found that as demand of shipments exceeded supply of trucks, (due to seasonality or other factors), trucking companies pushed more trucks into the market in order to take full advantage of the climate and meet the demand. Companies were hemorrhaging money to pay inflated shipping rates since carriers could not honor their contractual agreements. Typically the onus falls on the carrier to absorb the extra cost when in a contractual agreement, but in the face of having no capacity a shipper or customer would have to pay more to buy a one off truck on the spot market. Truck market capacity lags behind demand for trucks as carriers hire more drivers in an attempt to bring more trucks to the market, and thus shipping rates become inflated while truck supply catches back up. 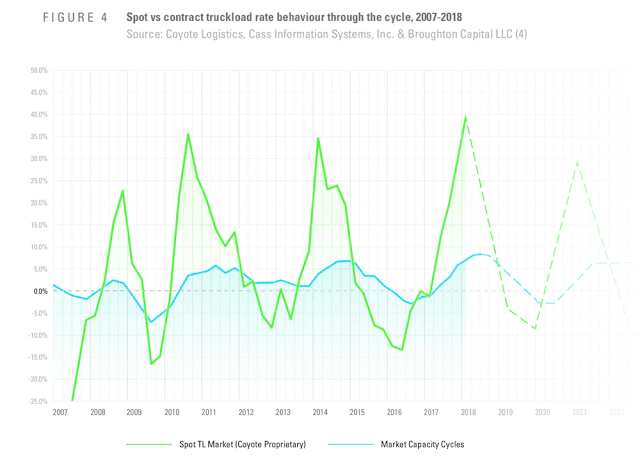 Based on the cycles identified, The Coyote Curve surmises that the trucking industry turns over every 2 years. If they were correct, while rates were the highest they had been in quite some time at that point in 2018, the market was due up for a change. As it turns out their prediction was spot on. The trucking market softened as more trucks came to market. Carrier rates took a downturn all through the last fiscal quarter of 2018 and has continued that trend thus far in 2019. 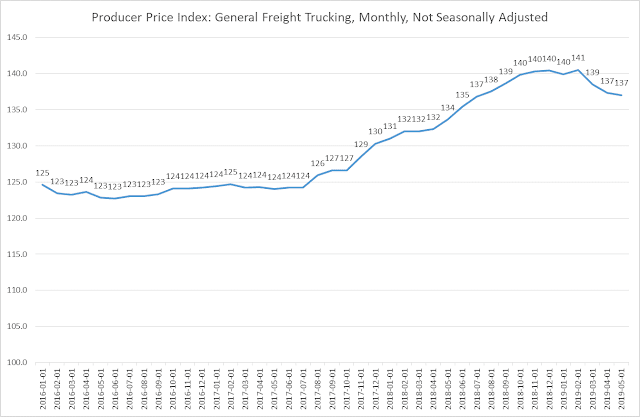 This volatility in the market has direct effects on nearly every company’s supply chain. The trucking industry is the heartbeat of the U.S. economy. It accounts for approximately $721 billion in value of moved goods and 63% of volume in the transportation industry, annually as of 2017. When industry experiences a tumultuous period there is a windfall of effects. Trucks can’t meet monthly/weekly/daily commitments, end products/raw materials aren’t delivered on schedule, and demand outpaces supply. It all results in dollars lost due to stock outs, the loss of potential sales, and delayed lead times.

This cyclical nature is especially relevant when considering how major companies establish pricing. Imagine you’re a shipper and you are creating fixed price annual contracts with your customer as well as freight carriers. In all likelihood, someone, either the shipper, carrier or final customer, is going to lose out on their margin when the prices of moving goods varies from month to month.

So what does this all mean? Well, if the trucking industry truly does ebb and flow at a predictable interval, like Coyote’s Coyote Curve would suggest, perhaps companies need to reevaluate the ways they price out their supply chains. Maybe there is a better way to construct contractual agreements. This could incorporate greater pricing flexibility that reacts to the market and accounts for the variable changes in the transportation industry. So, while rates are on the downward trend in 2019, be careful before you make your next fixed price contract with a carrier as prices could be changing soon. Food for thought.
Logistics