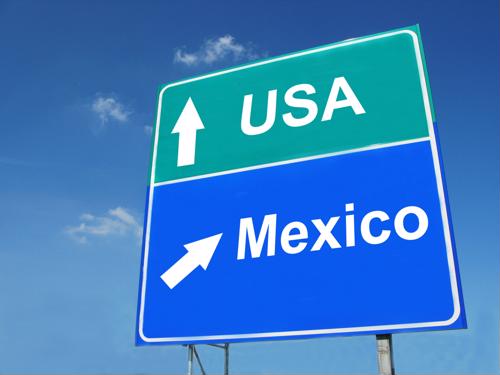 As the U.S seeks to re-balance the global economic playing field with several of its trade partners, Mexico could be hit with tariffs, an action sure to send shock waves throughout the retail supply chain. However, the levy may be rescinded if America's neighbor to the south does more to deter the flow of illegal immigration.

In an official statement issued May 30, President Donald Trump warned that all imports emanating from Mexico - the U.S.' third-largest trading partner - will be hit with a 5% tax starting June 10 if the Mexican government doesn't take meaningful measures to reduce the number of undocumented immigrants entering the U.S.

"Mexico's passive cooperation in allowing this mass incursion constitutes an emergency and extraordinary threat to the national security and economy of the United States," Trump said in a press release issued by the White House. "Mexico has very strong immigration laws and could easily halt the illegal flow of migrants, including by returning them to their home countries."

Trump further stated that Mexico has the means to prevent illegal entry among those coming from Central America, specifically Guatemala.

Tariffs could reach 25% by October
At the moment, the tariff threat remains just that, but if the border situation isn't ameliorated, the tax will go into effect at midnight on June 10, which is a Monday. The 5% levy could go up from there, however, potentially rising to 10% by July 1 and perhaps as high as 25% on Oct. 1 if meaningful measures aren't taken.

"Tariffs will permanently remain at the 25 percent level unless and until Mexico substantially stops the illegal inflow of aliens coming through its territory," the statement further read.

Unsurprisingly, the announcement was met with widespread criticism among Democratic lawmakers - as well as several Republicans - industry trade groups and businesses. Even bipartisan organizations - such as the Office of the U.S. Trade Representative - said both Mexico and the U.S. would likely feel the adverse effects on their respective economies, with businesses inevitably passing on the higher costs to consumers by raising prices on products and services. In 2018, the U.S. imported approximately $346 billion worth of goods from Mexico, The Wall Street Journal reported based on government data. Much of what exchanged hands was food and beverages, such as avocados, peppers and other forms of produce that thrive in warm weather climates.

"The clothing bought and sold in the U.S. largely originates from Mexico."

Apparel and shoe retailers chime in
The clothing bought and sold in the U.S. also largely originates from Mexico, which precipitated a reaction from the American Apparel & Footwear Association President and CEO Rick Helfenbein.

"By imposing escalating tariffs on Mexico, our second largest export market and third largest trading partner, President Trump has again chosen to increase taxes on U.S. businesses, American workers, and American consumers," Helfenbein warned. "Because of President Trump's tax increase, Americans will pay more for everything from jeans to cars to computers to machinery."

All this being said, some economists aren't certain that the tariffs will actually come to fruition, given that the White House made similar threats that were ultimately tabled. Earlier this year, the administration floated the possibility of sealing the southern border due to more people entering the U.S. without the proper paperwork. Mission Produce, the world's largest avocado distributor, said that such a move would result in a run on avocados, depleting the U.S.' supply in less than a month's time. However, the White House decided not to proceed, giving Mexico a year to reduce illegal border crossings. Only next time, the White House cautioned, the closure would proceed.
Procurement News