My Insurance Company Should Not Be In The Logistics Business 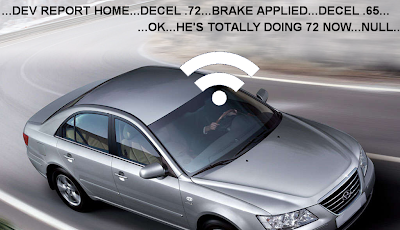 You know those ads on TV where an insurance spokesperson – be it some retro-hairstyled upbeat lady or a talking lizard – promise you steep discounts on your auto insurance just for letting them monitor your driving habits? They make it sound so simple, easy, and not at all intrusive.

I say this because my insurer, who I won’t name by name but they have pretty good hands and their commercials are rife with actors from Major League and Oz, increased my monthly rates a while back by about $60/month. There are no tickets, criminal charges, or accidents on either my wife or my accounts that would justify the increase, but when we called they were oh-so-happy to drop the amount down to our old rate in exchange for us using some of those tracking dongles that plug into our cars’ OBD ports. While my “suspicion-indicating” eyebrow just about punched through the ceiling when they told me that, whatever; send them now and stop charging me money. “Besides,” the inner monologue went, “What harm could it do? We’re both good drivers in simple cars – there’s no way we will be penalized.”

When the little candy-colored dongles arrived, the screenshots on their activation website explained that, while we would never be charged more money based on the devices’ findings, we could increase our savings by NOT doing any of the following:

While we couldn’t avoid the first one, we could pretty much avoid all the others because we can set cruise control and we neither one are teenagers in beat-up Civics doing our best racing maneuvers, flooring it at green lights and slamming on our brakes. Heck, even if we wanted to do that, the fact that we split our time between an old Hyundai and a 4-cylinder minivan pretty much meant we couldn’t.

It took three days of wheeling around before the device began reporting my driving data. When I pulled up the analytics website, I admit, I was geeked (I did the same thing when I got one of those automatic toll-paying devices. I’m a nerd.). That excitement was short-lived. In just the first trip I took – a 20 mile highway commute to work – I had somehow racked up three episodes of hard braking. "Whatever, fine, I’ll be more careful," the inner monologue went. By the end of the week, I’d racked up 13 instances of hard braking, 11 instances of “extreme braking” which I didn’t even know existed, and 27 miles of over-80 driving. Pretty impressive for a car that was set to drive 75, and either I'm a terrible driver or something was up.

A deeper look into the specific instances shows that their definition of “hard” for braking and acceleration is pretty subjective. And by “pretty subjective” I mean “it means whatever they want it to mean, whenever they want to mean it”. My hard braking instance descriptions included “braking from 75 to 70”, “braking from 73 to 69”, and “braking from 18 to 10”... otherwise known as “tapping the brake pedal”, “tapping the pedal again”, and “slowing down to approach a toll”.

I asked a friend, formerly a car electronics installer and now a mechanical engineer who I knew had taken his own insurance dongle apart, how the dongles compare to the commercial truck monitors he used to install. The tracking kits rose to prominence in the last two decades as the technology became reliable and rising oil costs and cost cutting needs drove trucking companies to use them en masse. The commercial devices, he says (and a quick Google search reinforces), use GPS to monitor speed and driver performance. He said insurance dongles, to appease privacy concerns, don’t use GPS but rely on engine data for speed and measure braking with an accelerometer, like those used to adjust screen positioning on a smartphone. He then pulled out his iPhone 5 to illustrate how easy it is to trip up an accelerometer. It was easy.

I'd prefer it if they didn't make decisions on my driving habits either.