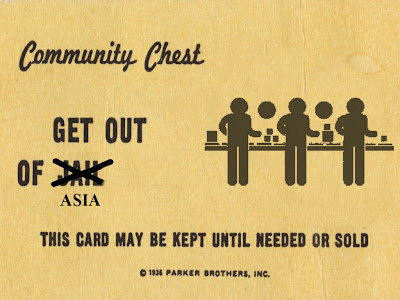 History is full of quotes and advice that seem to become more valuable as time passes. “Never get in a land war in Asia” is a popular one. “Don’t mess around with Jim” is also pretty solid. But, for businesses, “To save money, move production to Asia” has seemingly stood above the rest for what seems like a very long time, holding true for decades.

But that advice is shaky now, and here is a quartet of reasons you should get manufacturing out of Asia.

According to a recent survey by the American Chamber of Commerce in China, the results of which were released last month, a quarter of American businesses doing business in China have been victims of data theft, losing proprietary data and trade secrets due to cyber attacks. The problem has spiked in recent years, according to an article at ZDNet, and more difficult to trace as thieves storing their information on solid state hard drives are able to cleanly delete all evidence, whereas older magnetic disc drives kept remnants of old information even after several deletions. Relocating manufacturing to North America, and the intellectual property laws held by all of its resident governments, is quickly becoming a preferred solution.

“Well,” you might be thinking, “The product might get knocked off, but at least it’s manufactured cheaply.”  If you believe a recent report from AlixPartners, that reasoning won’t be valid for too much longer. The report states that, by 2015, the total landed cost of a product built in Asia will equal that of a product built in the U.S.. While rising labor costs in big production countries like China bear some of the concern, the real cost bloat is in the transportation across the Pacific, particularly the fuel going into the boat.

In 2011, when an earthquake and tsunami (and potential nuclear meltdown) combined to devastate Japan, a shortage developed for key technology components. Everything from iPads, to laptops, to video game discs, to video projectors quickly became hard to find. Later that year, when Thailand flooded, computer hard drives became scarce. While both countries eventually recovered, even a week's
delay can render financial harm to a business.

Asia has fallen victim to two devastating tsunamis in the past decade, is home to half of the largest active volcanoes in the Pacific “Ring of Fire”, is in constant earthquake danger due to its active tectonic plates, and has recently witnessed a higher flooding risk during the monsoon season due to global warming. For this reason, many companies are looking to other low-cost manufacturing centers in safer environments, like Mexico.