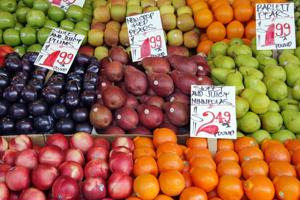 The United States Food and Drug Administration (FDA) plans to overhaul its culture as they prepare to implement the Food Safety Modernization Act (FSMA) in hopes of improving food conditions. The policy changes could directly impact the success of produce companies and cause commodity price increases.

Tree fruit farmers may be the hardest hit by the new regulations, according to the Washington Post. Fruits and vegetables usually consumed raw would be subject to strict new standards while produce generally cooked or processed before consumption will be exempt. Fruit growers worry about the implications of the new policies on their operating costs. According to the article, this could include irrigation water tests, sanitizing canvas fruit bags and preventing animals from getting near crops.

New practices in the FSMA

The FSMA seeks to stop deadly food-borne illness in its tracks, rather than react to outbreaks, which means they will be taking a firmer hand on supplier quality management. According to the FDA, new regulations will include preventive controls for food facilities, mandated inspection frequency, records access, mandatory recall and the authority to administratively detain food they suspect may be in violation of the law. As many as 3,000 people die from food-borne illness each year, according to the Centers for Disease Control and Prevention, and the FDA believes these cases are mostly preventable by keeping poor quality food out of the production supply chain and monitoring high-risk foods.

Fruit farmers are frustrated with the new responsibilities this adds for them because many tree fruit crops have very clean safety records, according to the Washington Post. They believe that the FDA should focus more attention on crops that have been linked to deadly outbreaks, such as spinach and cantaloupe.

"Part of our problem is that each commodity is different," said Tome Stenzel, president of the United Fresh Produce Association, to the Washington Post. "We agree on what the big risk factors are - water, soil amendments, animal intrusion, worker hygiene. But there's a question of whether the regulation ought to apply the same standards to every single commodity. If you're in the tree fruit industry - if you're an apple guy or a citrus grower - you look at it and say, 'What's the public benefit of me doing water testing of irrigation water once a week There's never been a problem.'"

FDA officials have said farms with average annual sales of under $25,000 would be free from new policies and growers with sales less than $500,000 per year who sell mainly to consumers within a 275 mile radius may be offered exemptions, states the newspaper. Smaller farms will also be granted more time to comply with new regulations.

In addition to new standards for domestic growers, the FDA will be paying more attention to imported food and ingredients to ensure safety for U.S. consumers, according to agency statements. The FDA will be able to require credited third party certification for high-risk foods. If foreign companies do not allow the FDA access to their facilities, the agency reserves the right to deny entry of products.

Food Safety Magazine warns that food companies should begin getting ready now before the FSMA is fully implemented so they can be adequately prepared for new inspection standards since the FDA will be much stricter. They recommend assessing current practices including regulations and possible procurement and supply chain oversight.

The authors stress the importance of keeping complete and accurate records, since one of the provisions of the FSMA is greater access. They suggest inspections will run more smoothly if the FDA can see that corrective actions were taken when problems first arose. Food companies should begin additional food safety training in advance so employees know what to expect during inspections and are sufficiently prepared.