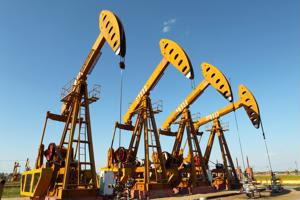 Not too long ago, the United States was importing about two-thirds of all oil consumed in the country, and now the figure is down to one-third. Overall, American consumption of gasoline has dropped by 16 percent since 2007, according to Businessweek. Americans are driving less, and auto manufacturers responded to gasoline concerns by creating more fuel-efficient vehicles. However, due to hydraulic fracturing, a recently discovered method of blasting water into shale to extract oil, U.S. oil has become far more accessible, reducing the dependence on foreign gasoline.

Why aren't gas prices going down?

Much of the new oil production in the U.S. is in remote states like North Dakota, Wyoming, Colorado and Oklahoma. These areas are far from oil refineries and large cities where the gas demand is the highest. Pipelines have limited capacity, so producers have needed to ship crude oil by alternative methods, such as trains and barges, which significantly adds to the price.

Oil produced in the U.S. is required to contain 10 percent ethanol, which adds to the cost of refinement. The extra transportation and refining costs get passed along to the consumer at the pump. Since the East Coast is furthest away from major oil centers, residents are seeing some of the highest gas prices.

Much of the oil extracted in the U.S. is high quality, which means that it can fetch more per barrel than heavier crude oil. U.S. oil has the potential to become a valuable global commodity, which could disrupt the economies of countries - like Angola, Nigeria and Venezuela - that depend on gasoline revenues.

However, the news isn't all bad. According to Businessweek, new refineries are being built in North Dakota, as well as additional rail lines to line the oil fields to major East Coast refineries. Some analysts predict that gas prices will be lower by the summer as the distribution networks continue to catch up.