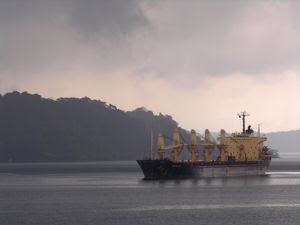 The expansion of the Panama Canal will allow higher capacity cargo ships from Asia to travel through the channels, Progressive Railroading stated. The project is scheduled for completion in 2015, and the added capacity will allow more foreign trade.

"In the future, we foresee trade growing between Asia and Latin America, where Panama also has a significant competitive advantage due to its unique geographical position at the nexus of the Americas," Jorge Quijano, administrator for the Panama Canal Authority said to Port Technology. "With East Asia sourcing more and more raw materials out of Latin America, in particular coal and iron ore, the expanded Canal will offer enormous new opportunities."

The expansion could cause a reduction in the number of U.S. air cargo centers with the increase to marine shipping capabilities, Air Cargo World reported. However, the rise in container shipping will lead to upgraded ports and expanded railroads and trucking networks. It will likely create many changes for supply chain management as shipping methods shift from air to sea and land.

The project has been focused on the widening and deepening of the Atlantic and Pacific approaches, the addition of new locks and deepening the Culebra cut - the Canal's narrowest point, which required four dry excavation projects, according to Port Technology. The expansion will allow much bigger carriers of up to 13,000 standard 20-foot units (TEUs) to safely pass through the canal, Trucking Info said. The current capability of the waterway is vessels of 5,000 TEU or less.

Quijano added this will enable suppliers to reduce operating costs and carbon emissions, as well as increase speed of delivery because fewer ships will be able to transport greater amounts of cargo. Another objective of the expansion is to cut down use of freshwater.

Air Cargo World said within three to five years, there will only be six major air cargo hubs in the U.S. Hubs in Southern and mid-Atlantic states will have the advantage to remain significant as inland railroad and trucking networks build up to meet increased shipments to Gulf and East Coast ports. There is potential for development of smaller air cargo centers, and ports with links to air cargo hubs may have an advantage because shipments will not experience delays.

Railroads are collaborating with ports to upgrade before the completion of the canal expansion in 2015. Florida East Coast Railway (FEC), the only rail provider to southern Florida's sea ports, is working with Port Everglades and Port Miami to build on-dock rail facilities as these ports will likely experience an increase of cargo traffic, Progressive Railroading said. The connection of the railroad to Port Miami has been suspended since hurricane damage in 2005.

"By summer 2014, we'll have the on-dock rail facility fully operational, which means that from Port Miami, we can hit 70 percent of the American population in a matter of days," Port Miami director Bill Johnson told Progressive Railroading.

He added Port Miami will have an advantage because the Atlantic exit of the Panama Canal will be deepened to 50 feet, and Miami is the southernmost East Coast port at that depth. Port Miami anticipates an upturn in traffic and profits by the end of 2015.

Expanded sea port shipments will create a demand for increased trucking networks. Trucking Info stated the industry has the capability to adapt to increased demand, and container transport will be dictated by ocean carriers and ports. The trucking industry does not predict there will be difficulties in meeting the rise in shipments. The Panama Canal is expanding to such a degree that it will have a large impact on logistics, but inland networks are working to upgrade.