Kraft's US ingredients scrutinized by consumers 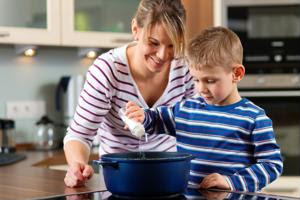 Food giant Kraft has made its macaroni and cheese a classic childhood meal, but the ingredients it uses in its American version of the product are stirring controversy among consumers and causing many to call for a change in the company's manufacturing processes.

The form of the dish sold in the United States contains Yellow 5 and Yellow 6, additives approved by the Food and Drug Administration (FDA), but thought to be tied to hyperactivity, allergies, asthma and migraines. These chemicals have already been banned in several countries, including Norway and Austria.

However, it's not just the presence of these additives that has sparked concern - it's the fact that the company excludes those same additives from the Kraft Cheesey Pasta sold in the United Kingdom. The additives serve to give Kraft's American dish its unmistakable color. While the company claims the presence of Yellow 5 and Yellow 6 are not harmful to consumers, it has replaced them with natural coloring agents - such as paprika - in the Kraft Cheesey Pasta sold overseas. This slight change in ingredients does nothing to alter the taste or appearance of the product, according to reports.

The virtually identical products have led consumers to question why Kraft allows the potentially harmful dyes to remain in its American version, but eliminate them from its U.K. products. Many have signed a petition to urge the company to employ the same manufacturing processes and ingredients it uses in its U.K. items at home in America, especially if the raw material costs are virtually identical.

While Kraft has not yet announced it will alter its processes, it could decide to alter processes in the future. An online petition urging the company to change its ingredients has gathered hundreds of thousands of signatures. The Guardian reported a similar petition condemning Gatorade's use of harmful chemicals gathered fewer signatures before the brand announced it would phase in new, less harmful ingredients.