Increasing congestion could have logistical impacts 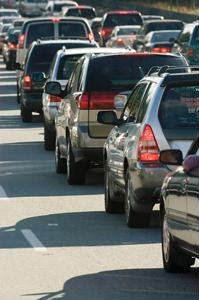 Many companies rely on trucks to transport goods across the country in a timely fashion and support their supply chains, but with traffic congestion increasing across the country, they may need to develop a new strategy to ensure their merchandise gets to markets, warehouses or purchasers on schedule. The most recent INRIX Gridlock Index (IGI) revealed traffic increased nearly 10 percent in February, the biggest year-over-year increase seen in two years.

Could worsening traffic have an impact on shipping operations?

February's composite IGI score was 6.8, indicating an average trip in the country's 100 largest metropolitan areas took drivers 6.8 percent longer than usual. While a driver in a hurry to make a delivery could be significantly impacted by that 6.8 percent increase, gridlock was even worse in certain cities. Congestion in Chicago leaped 20 percent year-over-year and growth in Phoenix contributed to a 19 percent spike in traffic. New York's gridlock also worsened, increasing 18 percent from February 2012 to February 2013, while Houston experienced a 10 percent jump over the year.

Businesses that rely heavily on trucking to transport materials or consumer goods could notice huge consequences if traffic continues to increase at this rate. Shipping times could be disrupted, potentially resulting in a shortage of consumer goods and compromising a company's revenue and public image. The jump in gridlock could also have unrecognized expenses for an operation, as sitting in traffic wasting fuel means a driver will need to fill up more frequently, increasing shipping fees.

To avoid the risks associated with growing traffic congestion and find a business cost reduction, some companies may seek alternative transport methods to get their goods to market. Those that previously relied on the trucking industry may investigate options that could help ensure shipping is timely and cost effective. Even though some states and local governments are launching projects to help ease traffic, those infrastructure improvements won't be completed for weeks, and companies that need more efficiency now may need to switch their processes immediately.