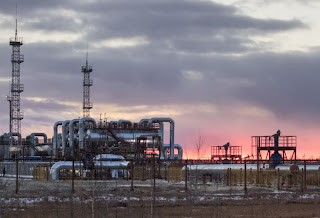 Gazprom, the world’s largest natural-gas producer and, according to the Financial Times, creator of the “best company song” (see it on YouTube), announced that in June it will be determining the price and volume with China for its gas supplies. Such a relationship would be welcome to Russia’s giant as it finds itself stumbling in the European market.

Although still the dominant player in the domestic market (producing 75% of Russia’s gas) and a significant presence in the international market (supplies approximately 25% of gas and more in former Soviet-bloc countries), Gazprom in recent years has faced falling demands and rising competition with the introduction of different gas options. Notably, buyers are less dependent on the Russian natural-gas monopoly with the option of procuring liquefied natural gas (LNG) from other suppliers in Europe as well as (potentially) from the US. The Economist has pointed out that, despite shifts in the playing field, Gazprom has stubbornly refused to sacrifice its traditional pricing and contractual structure, where customers sign expensive long-term contracts linked to the price of oil, which serves to undermine investment. Compounding Gazprom’s challenges are its outmoded facilities, an antitrust investigation conducted by the European Commission, and general inefficiencies and high costs. Furthermore, the company indicated that it has plans to invest $50 billion in gas fields, pipelines, and an LNG plant.

Gazprom has thus turned to Asia in an effort to secure its dominance in the industry amidst its mounting difficulties. Nevertheless, price is, unsurprisingly, still a point of contention in the Sino-Russian negotiations. Gazprom remains adamant to link gas prices to oil, for fear that European parties will continue to demand greater discounts if China manages to land a better deal. Meanwhile, China insists upon paying approximately the same amount as it does for gas from Turkmenistan. With a somewhat vulnerable Gazprom, China may appear to have the advantage in this contest. Except, of course, China’s delicate situation with regards to its regional tensions – especially with Japan – may serve as an incentive for it to quickly conclude a deal with a neighboring entity.

Agreements on the amount supplied to China have been tentatively settled, but certainly a myriad of economic, geopolitical, and internal political developments will be factored in before either party settles on an agreement. Talk about sourcing negotiations on a multi-staged global scale!
Best Practices, Directs, Utilities