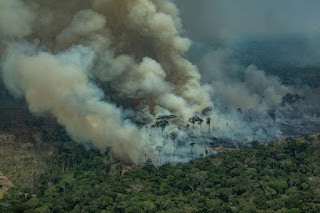 Brazil is not only battling fires throughout the Amazon, they are now battling with retailers. VF Corporation, whose portfolio includes brands such as Vans, Timberland, and the North Face, has decided to temporarily stop doing purchasing products sourced from the Amazon. They are not the only company to do this. H&M, another eco-conscious retailer, made a similar pledge several weeks ago.

The fires in the Amazon are up 84% compared to the summer 2018 months. These fires are believed to have originated from real estate speculators and ranchers who are clearing out the land. The reason for clearing out the land is to make more space in order to heard cattle. Brazil is known for exporting leather and beef. In 2018, they exported $1.4 billion of leather hides and skins and generated over 19% of the world's total beef supply. Both of these industries require enormous amounts of land, hence all the land clearing. Between the years of 1993-2013, cattle head has increased 200%. Obviously, the practice has grown more and more controversial

VF Corporation grosses over $13.5 billion annually. It's no small company, and this boycott could have real ripple effects for Brazil's bovine economy.  The corporation has stated that they will wait to source leather from Brazil until it has "confidence and assurance that the materials used in the products do not contribute to environmental harm in the country." Due to VF Corporation's footprint in retail, their actions and statements are meant to send a message to the Brazilian government and leather industry to take environmental action seriously.

H&M is another retail giant who spoken out against Brazil's government, expressed concern around the fires, and committed to boycotting Amazon-sourced leather. The company has temporarily placed a ban on purchasing Brazilian leather over their concern that cattle ranching is contributing to rampant deforestation throughout the Amazon. They too, do not plan to do business in Brazil until there are "credible assurance systems in place that can verify that leather does not contribute to environmental harm in the Amazon."

VF Corporation and H&M are standing up against poor environmental standards. Many people are hopeful that other companies will follow these two industry giants lead, for the sake of protecting not only the Amazon, but the planet as a whole.
Trending