Home Trending Is Amazon's Climate Pledge Too Little Too Late?

Is Amazon's Climate Pledge Too Little Too Late? 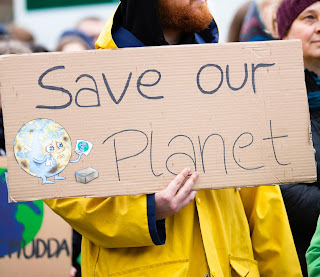 eCommerce giant Amazon last week announced its commitment to a series of ambitious climate goals. As The Climate Pledge's first signatory, the organization hopes to reach several Paris Climate Agreement milestones a decade early. In addition to providing regular sustainability reports, Amazon plans to invest $100 million in reforestation and establish a fully renewable infrastructure by 2030. They call on other businesses to join them by "accelerating their own decarbonization."

Amazon CEO Jeff Bezos, the richest person alive, announced his company's plans at a press conference in Washington. He also appeared to acknowledge that Amazon has so far dragged its feet on climate action. "We're done being in the middle of the herd on this issue," he remarked. He promises that Amazon has finally decided "to use [its] size and scale to make a difference." This includes placing what is perhaps the largest ever order for electric vehicles. The company expects to have all 100,000 on the road by 2030.

This announcement was not enough to stop more than 3,000 Amazon employees from protesting the company's "inaction on climate change" last Friday. The protests, taking place in more than 25 cities, were part of the week-long Global Climate Strike. Many protesters addressed the Climate Pledge and Shipment Zero directly. Per CNN, one sign read, "Great start, Jeff" while another encouraged Bezos and company to finally "Break free from fossil fuels."

Amazon Employees for Climate Justice preempted their walkouts by acknowledging the "huge win" and demanding that Big Tech's big players do more. Their press release pays particular attention to the industry's "complicity in accelerating the climate crisis." It also includes a promise that last week's protests are only the beginning of their own efforts. Charging Amazon with supporting fossil fuel companies and suppressing discourse, they resolve to "keep raising [their] voices."

They're far from alone. An estimated four million protesters took part in Friday's climate strikes. Among the most notable was sixteen-year-old activist Greta Thunberg who addressed the U.N. directly on Monday. Her scathing remarks opened with a warning to the world leaders in attendance. "My message," she said, "is that we'll be watching you." Though she didn't name names, it's clear that you includes governments and businesses alike. She maintained that pledges and promises will no longer suffice and that a "change is coming."

Young people, however, are increasingly skeptical that businesses are interested in bringing about this change. Deloitte's most recent Millennial Survey found that just 12% of respondents believe the corporate world is dedicated to "improving and protecting" the environment. Expect more and more to begin taking matters into their own hands. Thunberg characterized the Global Climate Strike as a "line in the sand" moment. Citizens across the globe (and even across age groups) have made it perfectly clear which side they're on.
Trending