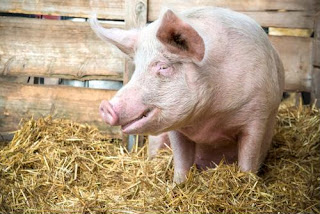 With a lethal, highly contagious disease sweeping parts of Asia and Eastern Europe, some of the world's most prominent food executives are wondering what the fallout could be on the meat supply chain and how to ensure what's unaffected remains that way.

The virus is called African swine fever, a haemorrhagic disease that's endemic to domestic and wild pigs. It can be spread very easily, whether by coming into direct contact with diseased animals or indirectly, such as through handling of tainted food waste, feed or biological vectors, according to the World Organization for Animal Health.

"Pig herds fell 32% this past July compared to 12 months earlier."

Although the contagion hasn't affected North America, it's reached every province in China, which is the world's largest pork producer, Reuters reported. Indeed, based on data from the country's Ministry of Agriculture and Rural Affairs, pig herds shrank 32% this past July when contrasted with the same month in 2018.

It's the rate at which African swine fever has spread that's raising red flags for Hormel CEO Jim Snee.

"Uncertainty in the protein industry is related to the outbreak of African swine fever," Snee explained during a recent earnings call, as reported by Supply Chain Dive.

During the same call, Hormel Chief Financial Officer Sheehan echoed Snee's comments, noting the virulence of the strain has led to volatility within the meat and protein industry. That unwelcome trend is expected to remain in place for the foreseeable future.

Surge in pork prices
This volatility has been evidenced by reducing pork supply, which has caused prices to swell considerably. Per data from Shanghai JC Intelligence, the national average price for pork reached $3.48 per kilogram on Aug. 19, Reuters reported. That's well beyond the $2.93 per kilogram recorded when August began, surpassing a previous record high set in 2016.

Pan Chenjun, senior analyst at Rabobank, told Reuters that while price fluctuation isn't out of the ordinary for pork products, but the fact that it's occurring earlier than normal poses an issue.
"The timing is earlier than expected," Chenjun explained. "August is still the low season but now everyday we see an increase in price."

Tariffs playing a role
While the volatility is no doubt predominantly linked to the contagion and its resultant dip in supply, it may also be attributable to the ongoing trade dispute between the world's largest economies in the United States and China. As referenced by Supply Chain Dive, the U.S. typically exports more pork to China than it imports, but the tit-for-tat between the two countries has led to a tremendous amount of instability and straying from the normal flow of commerce. What happens next remains to be seen. Pork suppliers are hoping for some type of resolution.

"If the tariffs are removed, the U.S. pork industry will likely benefit directly," Tyson CEO Noel White stated during a recent earnings call, according to Supply Chain Dive. He added that should the tariffs remain in place, pork suppliers will have to restrategize in order to keep the supply chain as minimally affected as possible, whether that's through backfill or other real allocation opportunities.
Meanwhile, a looming tariff dispute between the U.S. and Japan has been put on ice after Prime Minister Shinzo Abe and President Donald Trump hashed out a deal in principle. As reported by Bloomberg, the trade agreement, once finalized, would eliminate tariffs installed by Japan on American beef, pork and other agricultural products. In return, the U.S. would make more wheat and corn available to Japan for purchase while also tabling levies on Japanese-produced cars and trucks.
Procurement News