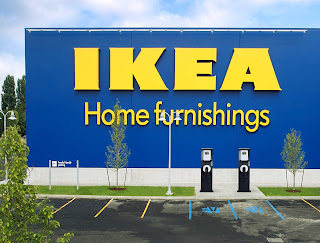 Recently Pacific Standard reported that Swedish furniture giant IKEA currently consumes one percent of the globe’s entire commercial wood supply -- roughly 17.8 million cubic yards -- to produce their furniture. IKEA, along with Home Depot and Lowe’s, is currently one of the three biggest consumers of commercially used wood in the world.  Although one percent may seem trivial, the impact of this number on global resources is huge.


While it’s difficult not see red over the fact that such a vast portion of the world’s forests are being utilized for cheap, disposable furniture, IKEA is doing its part to stay green.  In the last year, IKEA has put forth serious efforts to source more sustainable materials and improve their supply chain in order to help offset their massive global resource consumption. In the beginning of 2012, IKEA began replacing its wooden pallets with corrugated cardboard. Corrugated cardboard is a highly recyclable material and has no impact on wood resources. The company’s chief sustainability officer, Steve Howard, also noted in their 2012 Sustainability Report that twenty-five percent of the wood currently utilized by IKEA for their furniture is certified by the Forest Stewardship Council (FSC), which supports forest management improvement. The company has also noted that they are currently aiming to double that percentage in the next five years.


In addition to promoting sustainable sourcing practices, IKEA has recently implemented a number of programs aimed at furthering their green initiatives and improving the company’s environmental impact. Last October, IKEA kicked off their "People and Planet Positive" strategy, the goal of which is to utilize 70 percent of the company’s energy needs from renewable resources by 2015. As of 2011, the company leveraged wind farms in 6 countries throughout Europe to generate a total of 152 gigawatt hours of electricity, or roughly 12 percent of its total electrical need. IKEA also recently completed its first round of solar initiatives, which originally began as a solo project in October 2010 at a store in Tempe, Arizona. The installation of these solar panels turned out to be so effective at keeping energy costs down at the test location that IKEA made it their goal to install solar panels at as many locations as possible. Currently 39 out of 44 IKEA stores in the U.S. are now utilizing solar panels to generate electricity.


While IKEA’s massive consumption of a single global resource is less than ideal, their commitment to help offset this intake is commendable.  Not only has the company helped to improve their environmental impact, they’ve also benefited financially from their sustainable efforts.  IKEA’s has set an exemplary model illustrating that going green can be easily achieved no matter how large, or small, the business.
Utilities