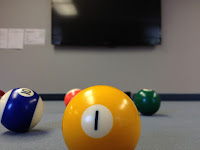 In its role of a Supply Chain Center of Excellence, Source One serves as an incubator for the development of new ideas and best practices in the fields of supplier management, category management, and Supply Chain/Finance integration. This type of incubation relies on strong communication channels and the free exchanging of ideas. We accomplish this through plenty of official channels: emails, IM, a sophisticated office telephone system combining desk phones with laptops and mobile devices, and HDTV/printer/phone/table-equipped"collaboration stations" situated throughout the building, so random hallway encounters can become productive brainstorming sessions with minimal fuss. But communicating through official channels during official business hours is inherently limited, and Source One looked to get its team talking through unconventional channels.

A regulation-sized pool table made a surprise appearance in a first floor multi-purpose room during Source One's first week in its new headquarters, and it quickly became the go-to place to hold an impromptu meeting-of-the-minds over a game or two. The Source One Pool Tournament is pitting teams of two employees, paired together at random, against one another for office bragging rights, prizes, and a donation by Source One to the charity of the winner's choosing.

Begun on Friday, May 24th, and continuing through the summer, the tournament will feature teams like Ballers & Shot Callers, SEO Speedwagon, Two Shoes & Man Ray, and the Stickmen playing best-of-three series to determine which of a laundry list of charities, including Make-A-Wish, the Bucks County SPCA, Planet Aid, and Wounded Warrior Project will receive a donation from Source One.

Last week's matches saw the Chalk-o-Holics triumph over Team Diego & Joe, and K-Money & The Heartbreak Kid eek out a win over the Ballers & Shot Callers. Stay tuned for the results of this week's!