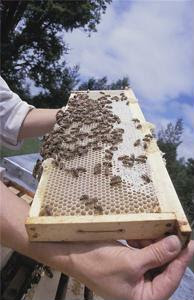 Honey bee populations have been disappearing over the last several years, and the U.S. is beginning to see the threat to the food supply chain, according to a new report for the Environmental Protection Agency (EPA) and the U.S. Department of Agriculture (USDA). Bees are responsible for pollinating crops that make up an estimated one-third of all food and beverage, and these crops contribute to $20-30 billion dollars in agricultural production per year. The decrease in managed bee colonies puts pressure on agriculture sectors dependent on commercial pollination.

"There is an important link between the health of American agriculture and the health of our honey bees for our country's long term agricultural productivity," said Kathleen Merrigan, deputy secretary at the USDA.

The USDA believes this past winter was the highest documented death rate for honey bees. The normal rate for healthy colonies was 5 to 10 percent per year. Around 2006, the death rate tripled in what bee experts refer to as colony collapse disorder. Some beekeepers have reported losing up to 50 percent of their hives.

The decline in honey bee populations is the result of several complex factors, including parasites and disease, lack of genetic diversity and poor nutrition. Parasites responsible for colony collapse disorder have grown resistant to chemicals beekeepers use to repel them. Bees need genetic variation to maintain healthy colonies that are better prepared to fight disease and parasites.

There has been a global decline in honey bee populations, and the European Union responded by banning three types of pesticides, the Chicago Tribune stated. The USDA report suggested beekeepers and growers need to collaborate because there are pesticide best practices that protect the health of bees, but they are not widely used by the agriculture industry. More research is needed to determine the impact of pesticide usage on honey bee colonies. The findings indicate the loss of bee populations is likely the result of multiple stressors instead of one single factor.