Sustainable sourcing of seafood is important for fishing industry health 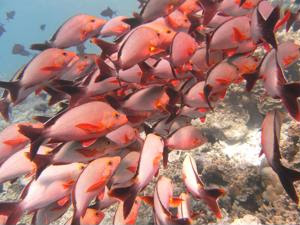 Many supermarkets have committed to sustainably sourcing seafood, and improvements have been made in the past year, according to Greenpeace's Seafood Sustainability Scorecard. Whole Foods, Safeway and Trader Joe's took the top three spots for proving responsibly caught seafood. Trader Joe's boosted its ranking after eliminating unsustainable fish from its stores. Wal-Mart started offering pole-and-line albacore, making sustainably caught and affordable tuna more available to consumers.

Despite improvements to sustainably sourcing seafood, there is still room for the industry to make changes. Americans ate 4.7 billion pounds of seafood in 2011, USA Today stated. The U.S. is second only to China in seafood consumption, so the focus on sustainability is important. Harpooning and spear gunning are examples of responsible fishing because fishermen can only catch one fish per device, which prevents bycatch, trapping an unwanted species in a net or long line.

Unsustainable fishing practices could have a significant impact on the health of the oceans, but some fishermen target scarce species to maximize profits, such as bluefin tuna, USA Today said. Rare species fetch a higher price. Because of tuna's popularity, it is at risk of unsustainable fishing.

It is challenging for consumers to make responsible choices about seafood because fish are frequently mislabeled in grocery stores and restaurants, The Boston Globe stated. Escobar, an oily species of fish, is often substituted for albacore, which is a more expensive fish. The newspaper originally reported on seafood mislabeling one year ago, and few changes have been made. Massachusetts is introducing legislation that would fine retail chains and restaurants for intentionally substituting less expensive fish.

Without sustainable sourcing of seafood, certain species could be placed at risk from overfishing. Major retailers are working with suppliers to improve seafood sustainability.