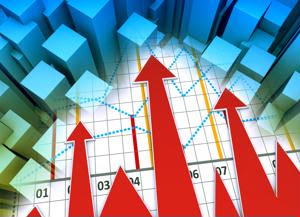 The annual figures in domestic manufacturing often reflect the strength of the overall economy, as is the case now for the first half of 2013 with gains slowing. The pace of the economy's recovery outgrew previous estimations, according to The Associated Press. The annual growth rate for 2012 was revised to a higher rate from 2.2 percent to 2.8 percent, taking into account an increase in consumer and business spending and the decrease in government expenditures.

While the revision for last year's data showed a slight increase than initially calculated, growth slowed in the first half of this year. Accounting for inflation, real gross domestic product grew at an annual rate of 1.7 percent in the second quarter of 2013, a small increase from the revised figure for the first quarter (1.1 percent), the Bureau of Economic Analysis reported.

Paralleling the slow pace of the overall economic growth rate this year, U.S. manufacturing was described as "close to flat in the first half of 2013" in an analysis by SC Digest. After heating up in the last quarter of 2012, the Institute for Supply Management's Purchasing Managers Index shows manufacturing activity began strong in 2013 measured at 53.1 (above 50 means expansion) but declined for three months consecutively. It was only in June that it climbed back to 50. Output also expanded and at a slow rate.

"From an output perspective, US manufacturing production (excluding mining and utilities included in the broader full industrial output) was also basically flat for the 1H, falling back as with the PMI after a brief rise early in the year," Supply Chain News said. "The index ranged between a high of 95.8 in February to a low of 95.2 in both January and April."

While output was shown to be down, factories can focus on manufacturing cost reduction to maintain their output and productivity.