Home Best Practices 47-Story Skyscraper Has Everything But An Elevator

47-Story Skyscraper Has Everything But An Elevator 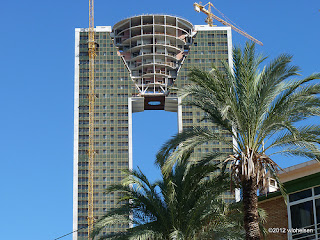 How does a 47-story skyscraper get built without an elevator? Okay, actually it has an elevator, as Gizmodo reports, but the elevator was only designed for a 20-story building. Somehow that seems worse.

This skyscraper in Benidorm, Spain was initially designed to be a 20-floor residential building. It also was a symbol of hope and prosperity as the city slowly escaped the financial crisis of the last five years. The builders expanded the project plan to tack on an extra 27 floors, but never expanded the elevator systems in the building. Elevators for 47-story buildings require a larger footprint than those for 20-story buildings, and in this building, the space simply does not exist.

This is a prime, and expensive, example of how planning is crucial to a successful project. In the case of this building, multiple factors contributed to its failure. The first construction contractor went bankrupt, safety measures were cut to save money, and funding was so scarce at times that construction stalled for months at a time. The people responsible for constructing this building were so intent on getting it done that they didn't stop to reexamine the plan once the scope changed.

Even if we're not building skyscrapers, anyone who's worked on more than a handful of projects knows how often scope changes occur. Often they're inconsequential changes, but sometimes the changes are so vast that the entire project is redefined. In either case, it is well worth the time it takes to sit down and examine how scope changes affect other aspects of a project, even the minor ones.

Enjoy this article? Get more insight from our Source One's strategic sourcing experts delivered straight to your inbox by signing up for our newsletter.