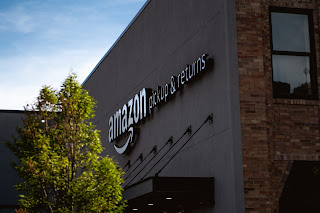 Amazon’s role in the American economy continues to increase. Nearly half of all American households own an Amazon Prime membership and Amazon receives one in every two dollars that Americans spend online (ILSR). It is also predicted that in the next five years, a fifth of America’s retail market will shift to e-commerce; Amazon will capture about two thirds of that portion. Through the acquisition of several companies, such as Whole Foods and Zappos, Amazon increases its market power and diversifies the sectors it competes in.

Amazon’s present-day supply chain process is divided into four main steps: warehousing, delivery, technology and manufacturing. The warehouse and delivery process begins with a customer’s order. Once the order is processed, the warehouse is notified and the product is placed on a conveyor which is sent through the distribution center. Then, the product is matched with its order and automatically sorted. The item is later boxed and shipped. Throughout the process, various methods of technology are used to ease Amazon’s pick, pack and ship method.

However, with increased growth comes a need for Amazon to adapt its supply chain. Amazon continues to design ways to decrease delivery time and may even introduce Prime Air, a drone-based delivery system that provides 30 minute delivery. Amazon must expand its fulfilment network to accommodate for the storage and sales of products. Therefore, Amazon will hire over 6,000 employees to pack and ship orders. Amazon will also build new warehouses and fulfillment centers throughout America and integrate robots to increase the speed of shipments.

Back in March of 2012, Amazon purchased Kiva Systems for $775 million. Kiva Systems manufactured robots utilized in shipping centers. The acquisition of Kiva allowed Amazon to reduce its “click to ship” cycle from around 70 minutes to 15 minutes and saved Amazon 20% in operating costs. Similarly, Amazon recently acquired Canvas Technology, a robotics startup specializing in developing autonomous delivery of goods. Amazon also integrated Pegasus and Xanthus, two new robots which quicken operations at fulfillment centers and warehouses. These robots sort and move packages, while reducing delivery times and decreasing damages. Robots are becoming increasingly crucial in Amazon’s effort to boost the strength of its business.

Amazon’s efforts to mature their supply chain allows them to be one of the largest growing companies in America. Analysts estimate a 32.8% average yearly growth rate for Amazon over the next five years (NASDAQ). With the use of new technologies and expanding the caliber of its distribution methods, Amazon is improving its supply chain to conquer the American e-commerce market.
Facility Management, Logistics, Trending