Marck Goldstein on Tuesday, September 10, 2013 IT,
Our need to be connected to our information at all times didn’t just happen overnight. As business processes have gotten faster, and more data is available in real time, our ability to make business-critical decisions has increased. We are now so overwhelmed with information from all corners of our lives – professional, social, financial – that it’s no wonder we are seeing more new ways to capitalize on that information, and put it right in front of us precisely when it arrives. 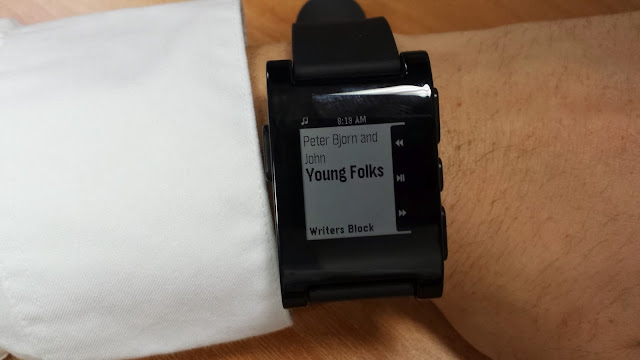 I’ve been thinking about this lately because I just purchased a Pebble SmartWatch. It’s a handy little wristwatch, no bigger than a traditional Timex, and it buzzes when I get new messages, emails, and other phone notifications, displaying relevant information on its face. It even allows me to see other information, like the weather, notifications, and my phone’s current battery life, as well as control music and a few other functions without ever having to take my phone out. Because of an open API, people are creating more uses every day. What really got me thinking about it, since I somehow understood the device's intrinsic value to me when I bought it, was when a co-worker asked very plainly if I really felt like I needed to be that close to my information and notifications. Without much thought, I offered back a resounding “yes!”

The Pebble works as a remote control for your smartphone – the device itself doesn’t handle the bulk of the calculations; it only has enough internal thinking power to function as a digital watch. Even the configuration for its two-bit e-paper display is handled by the phone, leading to many criticisms of the smartwatch as not being particularly smart.

Having seen the response and interest in wearable tech, the tech giants are now having their own go at it, with Google, Apple, Samsung, and even Nissan all releasing their own version, and one of the major improvements they’re making is pouring computing power into the tiny wrist-mounted screen. The first of these to come out, Samsung’s Galaxy Gear, has been held up to mixed reviews, with people complaining that the native processing and OS are clunky and unintuitive. My question is: is this really the way to go?

Certainly there’s some novelty in the “ubiquitous computing” future, and hiccups and birthing pains for newer-than-new technology are to be expected as we learn what is really required of new types of devices, but is it efficient and feasible to have everything with a screen packed with processing power, or would it be better to move towards thinner, lighter clients with enhanced connectivity?

Think about it this way: I use Google Play Music to store my music in Google’s cloud, which I stream to my phone, the information about which is displayed and managed on my watch. So when I push the “next” button on my watch, it sends a signal via Bluetooth to my phone to send a signal to Google’s server to move to the next song. For sourcing people, the first impression of that line is bound to be that it’s incredibly long, and inefficient. What if I just kept my music on my watch, the object that’s most accessible all the time, and played it from there? And that’s where the hidden costs come in. At $149.99, Pebble is able to produce something that is robust yet simple and uses the processing power of a host. Samsung’s Galaxy Gear is expected to retail at around $300, twice the cost, and only a few more capabilities. When you start outfitting every piece of technology with a processor, file system, and other hardware components to make it more powerful, you increase costs across the board.

It’s analogous to the emergence of more electric and hybrid cars. Concerns about them not actually appreciably mitigating emissions since they still require a connection to a potentially polluting electrical plant were quelled when the relative efficiency of that one centralized coal plant was weighed against that of a million individual power generators represented by the individual cars on the road. As long as you have reliable and efficient conveyance methods for that energy, centralizing the process proved more beneficial overall.

The tech industry is experimenting with wearable technology more and more, and Google’s Glass is proof that they are willing to make real investments into continued R&D. It’s certainly fun to imagine that this will eventually lead to neuro-silical integration on a reliable scale and that one day we’ll be offered contact lenses capable of giving us an augmented reality view of our surroundings, but the focus for us will continue to be where the investments in computing power are being made, whether locally in each device, or hosting those capabilities in a centralized server farm, it will have big implications for the way we all use computers.

If it were up to me, I would bank on thin clients as the future of personal and business computing. Massive investments in server farms have shown huge economies of scale created for companies that choose to move their computing into the cloud, and managing those systems, whether or not they are hosted, has only gotten easier. With more wearable technology on the way, we can see supply chains for information lengthen, but with the speed of the connections between our technology keeping pace with processing power, we will have more access to this information than ever before.
IT

7 comments so far,Add yours