Jamie Burkart on Monday, September 09, 2013 Humor Rants Observations,
I am an unabashed beer nerd. I’m always on the lookout for new and intriguing brews and, fortunately, with the craft beer renaissance we have enjoyed over the past decade, there’s never a shortage of great finds from microbreweries across the United States.

The transition from summer to fall is a great time for anyone who loves beer. The lighter beers like the shandies, the summer ales, and the saisons meant for quenching your thirst on a hot August evening give way to the märzen/Oktoberfest’s, kölschs, and lagers. These autumn beers are malty, heartier brews with spices like cloves, cinnamon, and ginger added to the recipe.

Also packing the shelves of your local beer store is a glut of pumpkin ales. Nearly every brewery has a version of a pumpkin beer these days and it’s nearly impossible to try all of the brands on the market in a single season (although it would be fun to try). 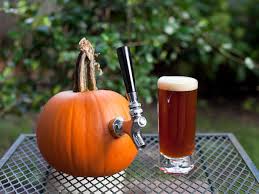 This year it appears that a considerable number of popular microbreweries have tried to expand the season, as I started seeing case upon case of pumpkin beer on the shelves as early as the last week of July. This is where I turn from a beer nerd into a beer snob. Just like some realms of society consider it bad form to wear white after Labor Day, I think it’s a travesty to pop open a beer clearly designated for the fall before the last vacationer is off the beach.

The Associated Press took notice of this as well. Their article, which ran on CNBC's website last week shows I’m not the only person who thinks seasonal creep shouldn't exist outside of department stores and easy listening FM radio stations.

Beer connoisseurs who wanted to savor summer a bit longer have been airing their gripes on social media. Taking to Twitter with hashtags such as #HolidayFail and #SummersNotOver, people like Andrew Hickey let it be known they weren't impressed with the early start. Forget being irritated about back-to-school ads, the 33-year-old tweeted—complete with a photo of the offending brew—back on Aug. 16. "Why is there pumpkin ale already on shelves?!?"


To be fair, the breweries have a legitimate reason for putting their pumpkin beers out so early. Demand is high so the breweries have to make more of it. And, as the best pumpkin ales tend come from those breweries who make their beer in smaller batches, capacity dictates that the beer needs to be made and shipped earlier.


From a retail perspective, with the multitude of choices consumers have, brew masters and their marketing staff believe getting their brand on the shelf earlier increases exposure in the marketplace and satisfies demand from those pumpkin fans who just can’t wait for the fall chill that goes so well with a sweet, heavier brew.

A beer nerd has to wonder how may years it will take until we see pumpkin beer released in time for Easter.

The top five pumpkin beers you need to try this season