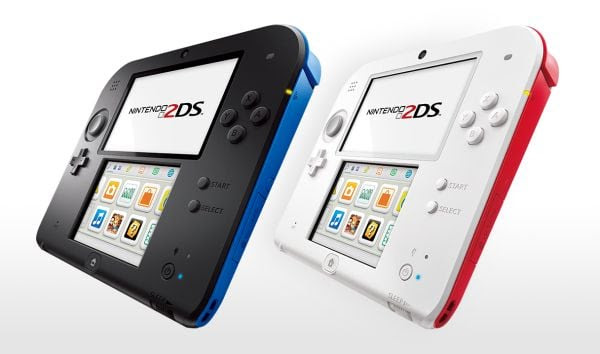 Nintendo is introducing a new, low-cost model of their popular 3DS handheld gaming system. It's called the 2DS, lacks the 3D capabilities of it's bigger brother, and is billed as a cheaper, more suitable alternative for younger gamers. It's also genius

The primary draw for the 2DS is its price. In comparison to the 3DS, the WiiU, and the soon-to-launch XBox One and PS4, the 2DS will be the cheapest holiday gaming option. It is expected to sell well -- especially since its launch coincides with the release of an update to Nintendo's super-popular handheld series, Pokemon --which alone should boost Nintendo's bottom line. But it's also helping in another way.

Look at this picture. On the left is the game pad controller for Nintendo's WiiU. In the middle is the 3DS. On the right is the new 2DS. Note the similarities?

1. Each has a camera at top center; that's the same camera.
2. The WiiU's gamepad screen is the same size and resolution as the top displays of the DS models. It's the same (it does have a touch-enabling digitizer laid across it, though).
3. Each has a cross-shaped D-pad on the left side and a diamond shaped collection of four buttons on the right. The game pad controller for the WiiU and the 2DS also feature round home, select, and start buttons. Those pads and buttons, regardless of console, are the same size and shape, meaning they use the same fab molds.

There are a lot of similar parts between the models.

First, they took an existing product, the 3DS which debuted in 2011; removed expensive hardware like hinges, 3D graphics processors, and 3D displays; and repackaged it as a cost-friendly new product, the 2DS. The 2DS, it should be remembered, is appealing to a wholly different market than the 3DS, so it is expected to supplement, not cannibalize, sales. Second, they built it from a minimum of new parts, so they are ordering more of the same parts, giving them higher volumes to leverage against vendors for lower prices and better T&Cs.

This is evidence of the benefits available by bringing procurement to the planning table, and a warning bell to those departments that are unprepared to sit there. How prepared is your department?
Best Practices, IT