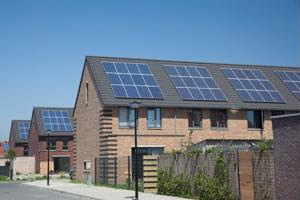 With advanced and innovative technologies making it possible to explore more environmentally-friendly alternatives to production, corporate investments promoting sustainable sourcing are increasing. In a study by analyst firm Verdantix, 69 percent of respondents said they believed it was important to enhance activity surrounding sustainable product innovation in the next 12 months, according to Sustainable Planet. Respondents in the survey included 250 leaders in sustainability located in 13 countries and feedback from product sustainability experts.

"The positive results from product sustainability investments include improved consumer trust in the brand, reduced logistics costs and lower exposure to supply risks," said Rodolphe d'Arjuzon, Verdantix global head of research. "Insights into how to achieve these benefits are now diffusing across sectors such as footwear, consumer electronics and packaging."

Many of these international business leaders said they plan to increase investment on product sustainability, with 13 percent intending to increase by double digits while 32 percent expected single digit expansions. In response to what firms can do to increase their competitive advantage, d'Arjuzon said companies can incorporate lifecycle analysis into business strategies and pointed out the role of market research. He said the benefits of product sustainability investments are difficult to predict, a reality that may hinder firms from incorporating innovations into their business model to lower risks and reduce manufacturing costs.

Private investment in green projects to hit $10 trillion in 2020

Based on such sustainable business trends, eco-friendly investments are projected to reach $10 trillion by 2020, according to Sustainable Brands.

In a report for the Green Transition Scoreboard, investments have jumped to $5.2 trillion in July from $4.1 trillion in January. As a financial analysis tool for monitoring private investments to fund green activities since 2007, the GTS tracks increases in the Renewable Energy and Green Construction sectors. It also uses this data for asset allocation models to strategize for opportunities and risk management procedures.

Private investments in renewable energy are benefiting this industry by lowering costs and increasing efficiency. This spending also plays a crucial role in reversing beliefs about lowered returns on investment in funding green projects.

"A large portion of this mid-year jump is due to better reporting, by market research organizations and companies themselves, of green activities and initiatives," said Timothy Jack Nash, director of sustainability research for Ethical Markets Media.

As a major investor in green technology, the Department of Energy recently hit back at critics of its funding for alternative energy companies, according to CNBC. The DOE has loaned $34 billion to the green sector as part of its lending program established in 2005. This federal money has gone to 33 companies to pay for alternative energy projects, including 13 solar energy companies which are currently generating power for the nation's grid.

However, the investments have resulted in a few start-up failures that ultimately cost taxpayers millions of dollars. Despite criticism of these losses, the DOE argued that the green lending program has had more successes than failures - the success rate is better than Wall Street. Energy Secretary Ernest Moniz highlighted Tesla Motors, which was able to pay back a $465 million loan after its line of vehicles has quickly become a leader in electric cars.

An energy department spokesman told CNBC that the start-ups that had high-profile crashes accounted for approximately 2 percent of its loan program. The spokesman also said these losses had not yet reach the 10 percent of the loan loss reserve Congress established for the program.