Home Data Science Eight Things You Might Not Know About WhyAbe.com 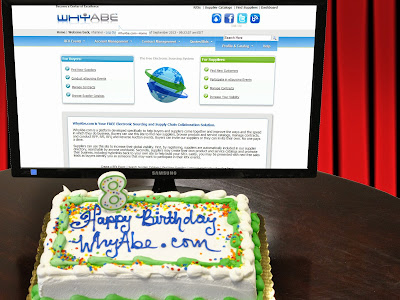 8. Some of the first items sought on WhyAbe were Sugar, heating oil, and a large quantity of GPS-equipped heart monitors.

7. Suppliers can be invited to WhyAbe on a per-event basis, or they can register on the site permanently and maintain a storefront. There are currently several hundred supplier-operated storefronts on WhyAbe.com, allowing users to quickly source everything from sneakers, to heavy mining equipment, to silicone breast implants.

6. When it debuted in 2005, WhyAbe could only be used to conduct RFX inquiries. Reverse auctions were added 13 months later in October 2006.

5.  Blind auctions, which hide suppliers' identities as required by certain government sourcing events, were added in 2012.

2.  WhyAbe's platform is so robust and has such a lower barrier to entry in terms of user familiarity that it serves as the skeleton of many major corporations own private eSourcing solutions.

And finally, the number one fact about WhyAbe.com is...

Have a WhyAbe success story? Add it below. Interested in trying the service out for yourself? Sign up at WhyAbe.com and get started!
Data Science