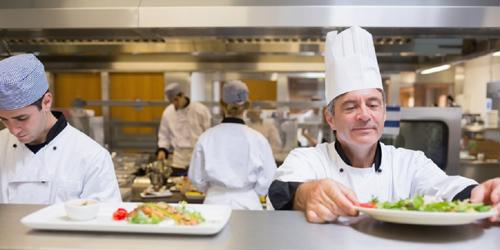 Although restaurant chefs tend to earn more than their cook counterparts, employment among the former has fallen for the second straight year, according to newly released figures.
Based on a recent study from Chef's Pencil, the total number of chefs working full-time in the U.S. fell 4.3% in 2018, to 128,600, with some of the biggest losses realized in New York, Texas, Michigan and Tennessee on a year-over-year basis.

Meanwhile, and somewhat counterintuitively, the number of line cooks over the same period rose, reaching an all-time high of 2.4 million last year, Chef's Pencil reported, based on data from the Bureau of Labor Statistics.

Sharp difference in earnings for chefs versus cooks
There are a few reasons as to why the employment supply chain seems to be going in opposite directions among restaurant kitchen staff. One is salary. As noted by Restaurant Dive, while earnings are up for chefs as well as cooks, chefs earn considerably more than their subordinates, to the tune of $52,160, on average, versus $27,580 - nearly two times higher. Because of this discrepancy, eateries may be hiring line cooks at a more regular clip to save on operating expenses.

Another potential contributor to the divergent trend is a chef shortage. Hotels, casinos, corporations and highly compensated public figures have the capital to pay chefs a more generous wage, leaving cooks to vie for traditional restaurant positions.

Foodies give A's to Chick Fil-A
Whatever the ultimate reason, restaurants - and the overall dining industry - are faring quite well these days. Quick-serve restaurants saw sales rise 20% in 2018 among the nation's 150 largest restaurant chains, and by close to 5% for the top 10, Restaurant Business reported, based on figures from Technomic's Top 500 Chain Restaurant Report. Chick-fil-A, which has received more customer volume in recent years due in part to rave reviews, pulled in $10.2 billion in 2018, a 13.5% increase compared to 2017.
Procurement News