Home Source One News Mentorship Monday: A 30 Under 30 Star

Mentorship Monday: A 30 Under 30 Star 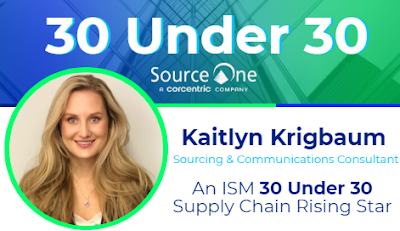 Happy Monday folks! This week we have a feature of one of Source One's own that was named an ISM 30 Under 30 Supply Chain Rising Star, Kaitlyn Krigbaum.

Interestingly enough, Kaitlyn happened to begin her professional career in the mental health industry. There she was involved in developing treatment plans for patients. Kaitlyn says this was a "very relationship-driven environment." This environment as well as her garnered empathy and advocacy skills helped Krigbaum as she followed her interests and transitioned into business consulting and recruiting.

Kaitlyn got her first taste of Supply Chain when she moved into recruitment, as she placed many candidates into Procurement and Supply Chain roles themselves. These positions peeked Kaitlyn's interests and she later found herself in one herself, immediately taking to discovery calls and strategy development.

One of Krigbaum's early mentors told her that it's okay to think outside the box, and that thinking purely analytical can impede creativity. Kaitlyn takes this advice with her to this day as it has helped to bring her much success as a Procurement professional. Even though she had an unusual start she knew that because she had the ability to think creatively she could ecxel in the industry, and that she has, standing as a recognized star in her field.

On this Monday, and many to come, don't be afraid to think outside the box. Just because something was always done a certain way, doesn't mean its the right way. Innovation is the key to driving success, so get creative, get risky!

Have great week everyone, until next time.
Source One News