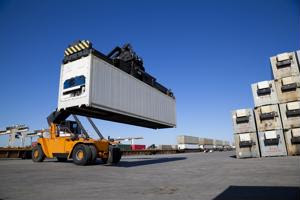 Transportation is an essential but costly part of business operations, calling for firms to approach freight sourcing carefully. When trying to determine the best way to reduce business costs, incorporating more fuel efficient vehicles that emit less harmful gasses into the air could lessen fuel costs as well as help the environment. By investing in green technologies like selective catalytic reduction devices, companies can improve the productivity of their transportation vehicles in the long run.

The transportation sector - including the movement of people and goods by trucks, trains, planes and more - accounted for 28 percent of all U.S. greenhouse gas emissions in 2011, according to the Environmental Protection Agency. Emissions from this sector have increased almost 18 percent since 1990 as people travel more and depend on transportation of goods, while vehicle fleet efficiency has remained the same. However, companies such as supermarket chain Meijer are working to lower their environmental impact, CBS affiliate WWJ reported.

Meijer said its vehicle fleet has reduced its carbon emissions by 60 percent after following the EPA's near-zero emissions standards in 2010. Meijer has 203 stores spread out mainly in the Midwest.

"This is an extremely rewarding achievement that truly speaks to our commitment to the environment," said Rick Keyes, executive vice president of supply chain operations and manufacturing. "Not only are we integrating cutting-edge technology into our business, we're also working under the philosophy that to be a good company, we must be a good neighbor."

In addition to cutting greenhouse gas emissions by more than half, Meijer has reduced the amount of nitrogen oxide released into the air by 55 percent or the equivalent of 525 tons. The trucks incorporate selective catalytic reduction technology, which treats engine exhaust that contains nitrogen oxides emissions and turns this gas into nitrogen and water to allow the engine to run more effectively.

The chain's fleet has 170 semi-trucks that contain fuel efficient engines, which are also made to have fewer emissions and meet or exceed the EPA"s near-zero emissions requirements. Through increasing the efficiency of its fleet, Meijer has increased its fuel economy by 5 percent. This results in an annual savings of 105,570 gallons of fuel.

"The impact is tremendous because the Meijer fleet makes deliveries to our stores 26 times each week," said David Hoover, director of outbound logistics.