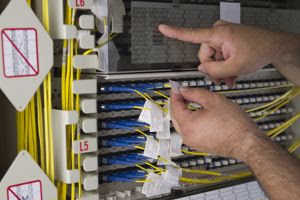 The cloud, big data analysis and seemingly limitless Internet connectivity are powered by data centers and the personnel who manage them.

Over the next decade, billions of Internet-connected devices are expected to come online, which will require a level of support the PCs of the early 2000s did not. For tech enterprises, the procurement process and talent management are going to be essential in meeting the demands of future businesses and consumers.

Advancing data center technology involves a symbiotic combination of optimal hardware, but rising to the next level doesn't only involve creating a faster Web.

In an effort to compete with search engine giant Google, Microsoft researchers and a team from Bing collaborated to create a specialized computer chip that expedites Bing's delivery time, according to TechNet.

The mechanism, appropriately named "Catapult," was unveiled in a paper at the 41st International Symposium on Computer Architecture in Minneapolis on June 16. Microsoft scientist Doug Burger outlined the project's capabilities, which are supported by field-programmable gate arrays that can be reconfigured by software residing in the cloud.

The implementation was demonstrated on a collection of 1,632 servers, improving throughput by 95 percent and effectively reducing the number of machines Bing's data centers need to power the programs.

Procurement services working for tech companies, as well as experts within the computer science industry, have foreshadowed the eventual demise of Moore's Law. This concept asserts that the size of computer chip transistors will decrease twofold every two years while simultaneously doubling processing speed.

Now, IBM has abandoned the classic CPU design for a microprocessor that mimics the architecture of the brain. The device is as small as a postage stamp and requires the same amount of power used by conventional hearing aids. Dubbed SyNAPSE, it uses 4096 neurosynaptic cores, with each combining computation, memory and communication.

Managed IT services and other tech companies are interested in procuring energy derived from renewable resources to power their data centers. According to Data Center Knowledge, Green House Data recently unveiled a facility in Cheyenne, Wyoming, that derives its power entirely from green power credit purchases.

Although the source didn't specify which resources were supporting the data center (wind, solar, geothermal, etc.), it did note a similar endeavor by Microsoft. The Redmond, Washington-based software giant unveiled a proof-of-concept implementation that uses fuel cells to convert methane gas output into electricity.

Procuring new technology and implementing revolutionary techniques are becoming regular parts of the tech industry. For example, how a firm leverages strategic sourcing may define its success in appealing to customers.