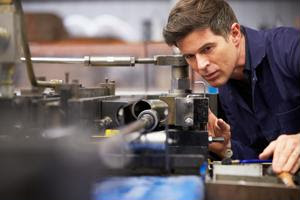 Traditionally, procurement services have connected organizations with other entities through which they can acquire goods.

Now, the provision has become much more flexible. Strategic sourcing specialists and other such professionals recognize that labor and skills are just as important as attaining materials.

In 2012, the Boston Consulting Group acknowledged a skill deficit of between 80,000 and 100,000, a number that's expected to rise dramatically over the next decade, the American reported.

Manufacturers operating in the United States are having difficulty finding people with the skill sets and wherewithal they need to advance operations. For this reason, many private enterprises are networking with universities that offer programs in science, technology, engineering and mathematics.

Although some journalists often detail special situations to assert the U.S. manufacturing economy's "inevitable" return, there's still room for improvement. For now, nearshoring to Mexico and other Latin American countries remains strong, but when will enterprises set up domestic factories?

While IndustryWeek contributor Robert Atkinson maintained that lowering the corporate tax rate and optimizing trade enforcement are two steps the U.S. government needs to make in order to foster investment in the nation's production market, he also asserted that specialty universities need to be created.

A shift in priority

With that being said, there are plenty of institutions offering engineering programs. However, Atkinson believes professors need to focus more on real-world problems and less on abstract science. Manufacturers need graduates who are capable of assessing vexing issues and proposing a solution.

This factor has resulted in a lack of private investment. Atkinson referenced statistics from The World Academic Summit Innovation Index, which showed Korean universities typically receive four times as much industry funding than American counterparts.

How can procurement specialists help?

Essentially, universities need to be able to obtain the capital necessary to better train their students for the workforce. A procurement service can help broker deals between institutions and private enterprises in need of skilled labor, by outlining:

In addition, universities and private organizations could show support for Delaware Senator Chris Coons' "Manufacturing Universities Act of 2014." The legislation proposes several initiatives that ultimately encourage the integration of advanced engineering curricula focused on innovation, designing, problem-solving and common use.