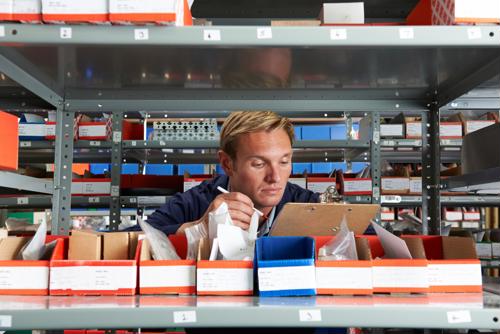 Much like the weather, the supply chain is an inexact science. Regardless of the industry, businesses must walk an ever increasingly fine line in order to ensure that they have enough product to deliver to satisfy demand, but not so much as to lead to monetary losses caused by unsold inventory.
But thanks to advancements in technology, it appears that companies are getting a better read on their buyer behaviors, and establishing a more well-oiled distribution supply chain as a result.

Scott Scheleur, assistant division chief for the Census Bureau's retail and wholesale indicator programs, told the online publication the inventory-to-sales ratio serves as a barometer of how adroitly companies are maintaining their supply chain.

"It's been a measure we've tracked for years to give an indication of how much inventory [retailers] have on hand," Scheleur explained.

Ports saw more container volume in November, December
The ongoing tariff dispute between the U.S. and China, among other major countries, has made the inventory situation a bit more difficult to assess, given the unknowns and various price fluctuations that trade wars typically create. However, retailers have largely been able to find the proper balance. According to the most recent month for which data is available, U.S. trade ports processed around 1.9 million TEUs (Twenty-Foot Equivalent Unit cargo containers) in December, based on estimates from the National Retail Federation. That's up close to 9 percent in comparison to the previous month and a near 14 percent increase on a year-over-year basis. The growth was largely a function of December serving as the height of the holiday buying rush for retailers and improved consumer sentiment.

Much of the inventory delivered was snatched up during the Christmas and Hanukkah buying blitz. Indeed, sales rose just shy of 3 percent last year compared to 2017, based on the NRF's data. That was lower than anticipated, but economists attribute the somewhat underwhelming growth to the partial government shutdown, the length of which was longer than originally suspected.

Businesses are better leveraging technology
Of course, when merchandise doesn't get sold, it goes back into storage for the time being, but the advancements in logistics and computational analysis has given companies more insight into buying trends, thus making better use of what space they have.

Mark Cohen director of retail studies at Columbia Business School, said the declining inventory-to-sales ratio is evidence of this.

"Technology has enabled the retailers and suppliers to shorten the supply chains to enable retailers to hold less inventory at any moment in time," Cohen told Supply Chain Dive during a recent interview.
Cohen added that while an insufficient amount of supply is certainly inadvisable, an overabundance of product is inherently risky because most things have a shelf-life - in the literal and figurative sense of the term.

"Inventory is frangible," Cohen further told Supply Chain Dive. "It's obviously perishable if you're a grocer, but it's also perishable if you're a fashion retailer."
Speaking of which, grocery items as well as clothing and fashion accessories have fared well in recent months. Clothing retailers witnessed a 4.2 percent uptick in sales during the all-important

Cohen said that so long as technologically continues to improve and retailers maintain a constant flow of communication with manufacturers, they should be able to optimize their supply chains even further in the months and years to come.
Procurement News