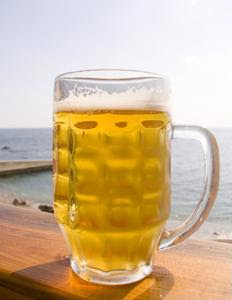 I enjoy beer. Thanks to the explosion of craft brewing, there's no shortage of people making and selling craft beer where I live in the Mid-Atlantic. It's one of my favored pastimes to stop in to the local brewpubs (within roughly a 30 mile radius) every 3-6 months and see what they're cooking up. Much like in the procurement and strategic sourcing profession, one must appreciate the skills required (knowledge of the science, good discipline and rigor in the process, a lot of patience) to make the endeavor a success.

But for "craft brewing," I'd suggest that we've reached a saturation point. In this region, there is so much beer being made that anyone who wants to stand out from the masses must have a truly unique, exceptional product. If you're the only microbrew in town, you can afford to have a no frills, solid drinking beer - and trust that your customers will spend their hard-earned dollars year over year to drink it. Certainly there's a market for that. On the other hand, a good portion of today's beer-drinking population favors the bold beers: the high ABV stouts, the crazy bitter IPAs, and the "why does this taste like a sweet-tart?" sours.  Again, if you're the only microbrew in town, and you develop a decent version of one of these sought-after beers, then you naturally rise to the top of the crop because you're not competing with anyone else.

On the other hand, in my densely-populated and burgeoning craft beer production region, there are at least a dozen breweries all making their version of an IPA, a stout, a Belgian, etc.  Sure, they're all going to be different - different nuances, different mash bill, different hops, different yeast. But because the craft beer drinkers all know what they're looking for in a style, and because they've been exposed to numerous examples of that style (again, thanks to the high number of brewpubs open for business), they tend to more shrewdly evaluate each beer they drink. "Well, this is fine. But it's nothing like XYZ Brewery's Triple Grapefruit Wet Hopped Brandy Barrel Aged Nitro Poured Ale."

Which brings me to my next point. Leaving aside local microbrews and brewpubs (by this I mean establishments that make their own beer and serve it to customers in a restaurant style setting, perhaps with a small local distribution outfit) - the craft beer renaissance has made it so that you can visit your local beer seller/beer distributor, and get your hands on any number of fantastic beers from all over the US. Public interest and advances in the way business handle their logistics operations have allowed us access to a huge selection of beer. And again, all this means that it's all too easy to get lost in the shuffle as a brand when you're competing with hundreds and hundreds of other brands.

I should note that so far I have neglected to mention the role that Marketing efforts play in expanding brand awareness. In my experience, true "craft beer" is not a widely or heavily marketed product. It's still kind of a niche thing. Well-known and widely available/poured beer makers like Blue Moon, Leinenkugels, and even Goose Island market themselves as craft beer, but in reality they have the backing of giants like SABMiller, MillerCoors, and Anheuser Busch. In other words, the makers of the most popular and highest-selling beers (Bud, Miller) are able to throw their weight around to market these other brands, and appeal to the growing craft beer sensibility (dare I say, the fad?). So how can other companies really afford to compete on a huge national scale in their marketing efforts? It'd be prohibitively costly, with perhaps very little to show for it.

To be clear, I am not knocking companies like SABMiller and Anheuser Busch. They have mastered the large-scale production of immensely consistent beer - no easy task. Their chemists are constantly adjusting their recipes throughout the year to account for changes in the mineral content of their water, inconsistencies in the crop yield, and atmospheric conditions to make every bottle of beer you get throughout the year to be identical. Plus, they run different programs to help smaller beer makers get their bearings - recycling production equipment, providing startup capital, etc. They certainly have had a significant role in making craft beer more widely available.

I read an article this morning over at Supply Chain Digital about SABMiller's advances toward eliminating production waste in the supply chain. They've implemented a new step in the production process - "dry de-husking" - where the outer shell of the grain is removed before mashing. This allows less energy to be used in the process of extracting sugars (that become alcohol and carbonation). Plus, those discarded husks can then be used as biofuel. It's a double whammy of efficiency from that standpoint - they're not only using less energy to begin with, they're gaining a new, non-fossil fuel based energy source.

But one thing the article doesn't discuss is the cost associated with the added step. How much money is required to implement dry de-husking? How much energy is consumed in performing the dry de-husking? It is still adding a step the process, whereas folks tend to equate efficiency with removing or consolidating steps in a process.  Does SABMiller expect to achieve net costs reduction and higher profitability as a result of dry de-husking?  Or is this more of a public relations move to improve their image and ride the sustainability / environment-friendly sentiment? Time will tell whether the costs associated with adding this step are outweighed by the benefits. Drawing the right conclusions from this initiative will depend on the right spend visibility, the appropriate rigor and discipline in the process, and solid market intelligence. In the meantime, those who are so inclined can crack open a cold one.