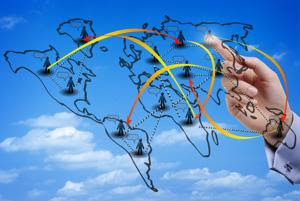 Companies have frequently used off-shoring to minimize costs. But as the trade industry expands and the economy grows, it is likely this procurement strategy will be adopted on a considerably larger scale.

The Global Sourcing and Trade Management 2016 Benchmark Report, which surveyed 200 industry professionals, found nearly half of supply chain companies, although currently lacking in global trade capabilities, plan to increase the number of global suppliers they use by at least 10 percent over the next few years.

New era of supply chain globalization
"The data shows that companies are in the midst of a transition," said SCDigest President Dan Gilmore in a statement. "Not long ago, a relatively few number of companies were leaders in global sourcing and GTM process and technology while most companies were laggards in such capabilities. Today, there are significant opportunities for many companies to integrate supply chain and related functions at a much deeper level that have previously operated somewhat autonomously."

By leveraging GTM solutions, companies can improve performance along all segments of operations, including inventory management, safety and regulation compliance and logistics.

Sourcing Journal Online suggested the rise of these technologies could in part be fueled by the recent proposal of the Trans-Pacific Partnership, which, if authorized, would connect almost half of the global economy.

According to the source, a dozen countries located throughout the Asia-Pacific area have already begun negotiating the trade agreement and it has provided companies with an increasing number of sourcing options in low-cost countries.

Unfortunately, most of the respondents revealed accurate lead time forecasting is not a process they are especially inefficient in. Perhaps this trend could be explained by the fact that nearly half of those surveyed also said they are not currently tracking or measuring the variability of global lead times, whereas 13 percent have only recently started to.

According to the benchmark report, supply chain professionals often experience issues with consolidating shipments and unmanageable volumes attributed to a lack of standardization.

The study's findings showed that nearly 70 percent of respondents feel that, so far, the technology investments they have made have not been able to adequately handle the increasing complexities and demands of supply chain operations. However, the majority of executives agreed that global sourcing provides many benefits, including flexibility and cost-savings.

As the industry moves toward globalization, companies will likely benefit from enhanced supply chain visibility. The research data showed that managers can leverage these tools, processes and technologies to gain real-time access and increased control of inventory management, identify weaknesses and hidden costs along the supply chain and uncover opportunities {to consolidate  operations.