Strategic Sourceror on Tuesday, May 06, 2014 Facility Management, IT, 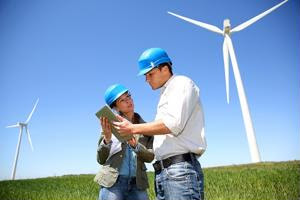 Over the past winter, consumers throughout the United States were constantly wondering whether or not a fossil fuel shortage would result in response to high demand for heat across the country. Though energy procurement services persisted, some professionals have speculated that renewable resources created a buffer between a functional infrastructure and collapse.

No stress on the customers' end

Michael Goggin, a contributor to The Hill, asserted that wind energy protected U.S. constituents from fuel shortages and severe spikes in electricity prices. A large number of people were cranking up the heat across North America from December 2013 to February of this year, putting an incredible amount of stress on grid performance specialists. Yet despite the ebb and flow of oil and natural gas deliveries, a resource solely dependent on weather conditions persisted.

Goggin noted that the Nebraska Public Power District reached record electricity demand on January 6, 2014, using wind energy to support 13 percent of its output. Apparently, wind technology was used to supplement the NPPD's natural gas generation due to the fact that fuel costs were up more than 300 percent over conventional prices.

"Nebraskans benefit from NPPD's diverse portfolio of generating resources," noted the NPPD, as quoted by Goggin. "Using a combination of fuels means we deliver electricity using the lowest cost resources while maintaining high reliability for our customers."

Goggin cited several other examples of utility companies that witnessed corporate cost reduction due to their usage of wind energy during the harsh winter. In light of this success, foreign technology developers owning property in the U.S. have expressed interest in initiating renewable energy projects to meet the demands of utilities. There's no doubt that green technology has proven itself as a viable option for those looking to revolutionize the modern grid.

Money Morning reported that Scandinavian home furnishing company Ikea recently announced that it intends to construct a wind turbine farm in Illinois. Corporate management explained to the press that the organization plans on selling the energy produced by the structure on the open market so that local communities can benefit from the technology. The source noted that the facility is expected to produce enough electricity to power 34,000 homes.

Ultimately, wind-based resources give utilities the opportunity to reorganize their strategic sourcing programs to include more reliable energy. Despite the views of a select few skeptics, there's no denying the fact that green technology has a place for itself in U.S. critical infrastructure.