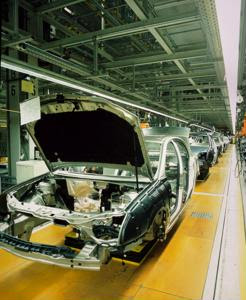 Vehicle production in North America jumped in 2012 and facilities ran at near-maximum capacity, according to auto industry news source WardsAuto. Data shows manufacturers on the continent were running at more than 97 percent capacity last year. These were the highest results found since WardsAuto began tracking production numbers.

Production capacity spiked as factories ran two shifts per day, allowing facilities to improve their production by 9.3 percent when compared to 2011. The industry has turned around drastically in just a few years; production was at just 51.9 percent of capacity in 2009, when the recession caused consumer demand to drop sharply.

Mexico and Canada leading the US

In the U.S., capacity use jumped to 91 percent, an impressive increase over 2011's 78.2 percent. While high, that number still lags behind the productivity seen in Canada and Mexico. Canadian capacity use shot up more than 19 percent to 99.6 percent; Auto World News attributed the spike to the closure of a Ford plant located in Canada. Mexico's numbers were even higher and plants ran at 124 percent of capacity. However, these impressive numbers aren't unusual, as Mexican plants also ran at above 100 percent capacity in 2010 and 2011, as well.

Plants, for both automobiles and other goods, may only continue to see their production numbers increase as businesses continue to nearshore manufacturing processes. Bringing production to North America allows firms to shorten their supply chains, be closer to their biggest markets and cut down on shipping expenses. While outsourcing factory jobs to less developed nations was popular for years, American manufacturers are slowly seeing more orders come their way as companies seek opportunities for cost savings.