Home Unlabelled Ford moves production from Europe to US

Ford moves production from Europe to US 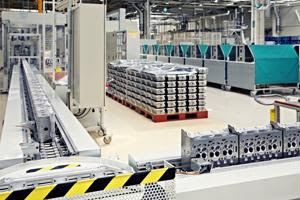 After years of sending their work overseas, many large corporations are beginning to see the benefits of manufacturing domestically. More companies are moving manufacturing facilities back to the U.S. to implement greater cost savings strategies and be closer to their main consumer markets.

Automaker Ford is the most recent example of a company which has decided to nearshore manufacturing processes and bring its production stateside. The corporation will shut down its small engine facilities in Spain and move production to a facility in Ohio. The factory already makes larger auto engines, but with this $200 million investment from Ford, it will start creating four-cylinder, two-liter EcoBoost engines and employ an additional 450 workers.

Moving production to the US

Smaller engines have become more in-demand in the U.S., as government standards mandate stricter fuel economy numbers from automakers; vehicles will be required to average 54.5 miles per gallon by 2025, making four-cylinder engines helpful to corporations trying to meet these standards. They're also attractive for consumers who want cars that get better gas mileage. Skyrocketing fuel prices have those in the market for new cars looking for vehicles that won't need frequent fill-ups.

Increased American demand isn't the only factor fueling Ford's decision to move production from Europe to the U.S. Bloomberg reported weakening demand in European markets will lead the company to shut down three factories on the continent by the end of next year, further increasing the appeal of moving operations to America.

The shift to Ohio could be a business cost reduction strategy for Ford, which would no longer need to pay for overseas shipping expenses or fret about foreign currency shifts. The company could even find lower labor costs domestically; Bloomberg reported the United Auto Workers union will allow Ford to pay new entry-level workers lower wages than current factory employees.