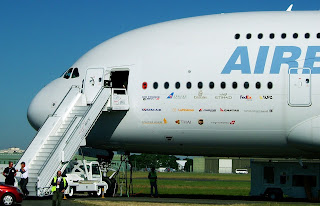 It is well recognized now that the commercial aerospace sector is a growing market, setting up a very optimistic future for numerous companies around the world. As discussed in previous blogs, airlines are expecting the number of passengers to grow 4.1% annually \, reaching a total of 7.3 billion potential customers by 2034. As a result, Aircraft OEM order books are filling-up for current models available on the market, and requests for new planes equipped with more efficient and more demanding technology to better serve future customers’ needs are on the rise as well. You’ve probably recently read about multiple aircraft projects, such as NASA working on a quiet supersonic passenger jet for faster long-range flight, or Russia’s UAC closely working with China’s COMAC on a wide-body-short-range aircraft , to respond to an increasing demand for short domestic flights. In other words, competition is increasing along with market growth, forcing aircraft manufacturers to become more innovative, on the look for emerging markets, while improving production capabilities to keep up with demand.


Supply Chain is directly impacted by such challenges. Indeed, both Airbus and Boeing, the current market leaders, are already rethinking their supply chain management. Both companies have been significantly consolidating their supply base with highly qualified suppliers, outsourcing the development of complex systems previously handled internally, and refocusing their activity to assembling planes in their assembly line. Before talking about specific examples relating to this trend, let’s take a look how the aerospace supply chain is organized:
·        On top of the pyramid, obviously, is the engine manufacturers (such as Rolls Royce, Snecma, etc.) and aircraft manufacturers (Boeing, Airbus, Embraer, Bombardier, etc.). These are the one usually showing off their most recent products capabilities at airshows, for both the interested public and potential buyers.
·        Tier 1 suppliers are system integrator companies specialized in developing navigation system (such as Thales, B/E Aerospace, etc.) or manufacturing engine modules and aircraft aerostructure (Kawasaki for the wings, Latecoere for the passenger doors, etc.)
·        Tier 2 suppliers are manufacturers providing Tier 1 suppliers with various type of sub-assembly. Tier 2 suppliers use Tier 3 suppliers to source all necessary sub-components needed for their products.

So, the question here is how each supplier category is impacted by the aircraft and engine manufacturers new supply chain strategy? Now is time to take a look at some numbers. In 2007, Airbus was using 200 tier 1 suppliers for the production of its famous double-deck, wide-body A380. In 2012, this number was reduced to 90 Tier one suppliers for its A350 model, representing less than half of the suppliers used in 2007. This doesn’t mean less systems or parts are needed to build a plane. This means Tier 1 suppliers are being requested to develop more capabilities to produce more complex and complete modules and systems.

Tier 1 suppliers have no other choice but to expand outside of their current core competencies, and become quickly recognized as a cost efficient, reliable supplier in multiple domains untouched until now. Tier 2 and Tier 3 suppliers are then impacted from the snow ball effect, as Tier 1 suppliers want to optimize their new supply chain model as well. As a result, Tier suppliers have to rethink their supply chain strategy in order to survive in this growing competitive market.
Best Practices, Procurement Transformation