The Strategic Sourceror on Tuesday, May 10, 2016 Procurement News, 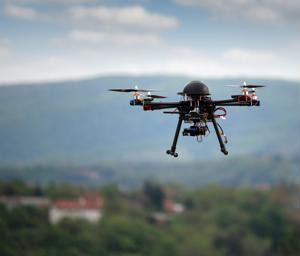 The use of unmanned aircraft systems in retail supply chains has been a buzz topic for years. A few years ago, Amazon announced it planned to incorporate delivery drones into its operations and in December 2015 released prototype designs for the aircraft that would be used for the company's "Prime Air" services.

These transporters can provide organizations with a wide range of benefits, including faster deliveries and enhanced inventory and distribution management. However, there are a number of challenges stalling the widespread adoption and implementation of the autonomous vehicles - primarily those pertaining to safety regulations. Of course, an obvious concern about these unmanned aircraft is the possibility of them colliding with other planes, birds or trees.

In March of this year, the Associated Press reported that flying robot start-up Flirtey had completed the first official residential delivery in the United States using a drone that was Federal Aviation Administration approved. The delivery journey was about half a mile long and consisted of a pre-programmed, GPS-guided route. The package was dropped at an unoccupied home. However, the event was a step toward progress for UAV deliveries, since the journey was made without incident.

Regulators take steps to accelerate drone policy developments
This month, regulators in both the U.S. and Europe have revealed updates on where they are in developing guidelines and safety regulations on the commercial use of drones, The Wall Street Journal reported. The FAA formed an advisory committee that will be responsible for assessing and identifying strategies for slowly allowing companies to use these aircraft vehicles. The European Aviation Safety Agency took similar yet separate measures: It created a task group to uncover any and all safety hazards the drones could cause, especially if they were to crash into other planes and aircraft.

These initiatives suggest the agencies are getting one step closer to developing definitive policies about drones. However, it is has been, and may continue to be, a lengthy and complex process. The Wall Street Journal noted that, last month, the FAA revealed that safety risks and hazardous events related to unmanned aircraft have risen over the past couple years; last year the agency received at least 1,400 reports about the autonomous devices flying in much-too-close proximity to airliners.

The FAA revealed that the organization's administrator Michel Huerta recently spoke at the AUVSI annual conference.

"Input from stakeholders is critical to our ability to achieve that perfect balance between integration and safety," Huerta explained. "We know that our policies and overall regulation of this segment of aviation will be more successful if we have the backing of a strong, diverse coalition."

According to the source, this committee has been created not for a one-time, quick fix but to have a long-term and lasting impact on the integration strategy and process. Furthermore, the panel will be headed by FAA Deputy Administrator Michael Whitaker and Intel Corp. CEO Brian Krzanich.

In January of this year, Intel Corp. acquired Ascending Technologies, a drone company based in Germany that specialized in autopilot software and sense-and-see technology. This deal allowed Intel to leverage sense-and-avoid algorithms to enhance the safety of drones.

Drones pose concerning safety risks
Contributing to the growing trend of disruptions and potential damage attributed to UAVs is that the devices are becoming both more popular and affordable. According to The Wall Street Journal, over the next four years, drone sales are expected to reach $7 million a year. Meanwhile, the costs of acquiring the aircraft are dramatically declining and it's possible to purchase one for a relatively low price, even if its capable interfering with other aircraft systems.

As these autonomous vehicles become more accessible and widely adopted, there is a growing need for stricter policies and regulations regarding their use and limitations. Facing this kind of pressure, on top of retail supply chains looking for ways to enhance customer service and operational efficiency, European and American lawmakers and agencies are ramping up efforts to set guidelines in place.

The Wall Street Journal noted that the first FAA findings for use of commercial drones should be revealed as soon as July, and that some of the proposed possibilities include users having to register to operate a UAV and undergo training.