The Problem with Ugly Christmas Sweaters 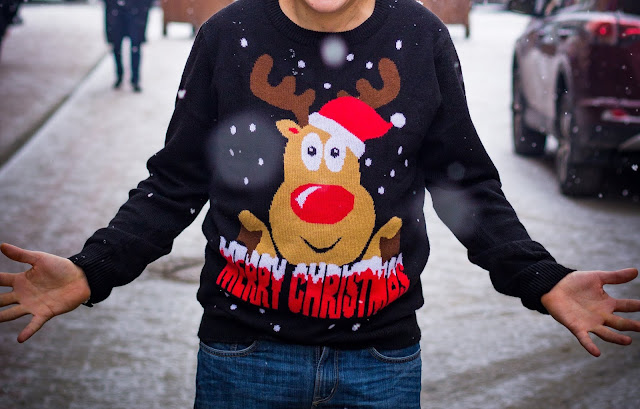 Let's take a quick look back to Christmases long, long ago. In those days, opening up a box to find an unappealing sweater was just an unfortunate reality, a reminder to be more specific on next year's wish-list. Itchy, gaudy knitwear was something you pretended to love, something you endured to spare a family member's feelings. Maybe you'd toss on an ugly sweater once a year to appease Aunt Ethel, but otherwise it sat in the closet unloved and unremarked upon.

Today, ugly sweaters are an industry onto themselves. Irreverent party-goers can celebrate their favorite meme, honor a beloved sitcom, and (where permitted) get a little raunchy with their choice of jumper. And they're only getting more popular. An analyst at Edited, a retail-focused analytics platform, reports that sweater sales have gone up 42% since last year. With entire websites devoted to all things ugly, shoppers don't even need to visit the mall (or support that eCommerce company) to get in on the holiday cheer.

Many of these sweaters are a lot of fun, but Teen Vogue reports that they're almost all "terrible for the planet." Like most novelty items, mass-produced ugly Christmas sweaters are cheaply made and quickly discarded. Studies by UK-based environmental charity Hubbub found that a whopping 95% contain plastic and 40% are worn just once before they're tossed in the bin. Since these sweaters aren't built to last (or wear in earnest) that's rarely a donation bin.

Even shoppers who hold onto their sweaters for several years' worth of chuckles aren't doing the planet any favors. Acrylic, the most common plastic in mass-produced ugly sweaters, releases 730,000 microfibers with each wash. That's more than five times the pollutants produced by a polyester-cotton blend garment. Scientists have found these microfibers in everything from polar ice to human excrement. In a sense, even the Ebeneezer Scrooges among us are forced to take part in this destructive holiday tradition.

While your Baby Yoda sweater won't single-handedly send the world deeper into its climate crisis, Hubbub suggests it's most definitely part of a growing problem. So-called "fast fashion" - which promotes rapid production and even more rapid waste - is anathema to both the planet and those trying to protect it. Hubbub considers the annual tradition of buying and discarding cheap, plastic-based clothing "one of the worst examples of fast fashion." That's saying something.

In addition to the environmental costs of cheap seasonal laughs, there's the immense human toll. After all, it's not Aunt Ethel knitting these sweaters, but employees in countries where "cheap labor, lackluster worker protections, and worse oversight" promote exploitation.

Taking a more sustainable approach to holiday parties doesn't have to mean forgoing ugly sweaters altogether. Second-hand stores are always chock-full of castoffs from Christmases past. If the holidays find you in a particularly creative mood, you might even consider sewing an ugly sweater of your own. Preferably, Teen Vogue concludes, "out of natural fibers, which are more likely to degrade when they escape into the environment."