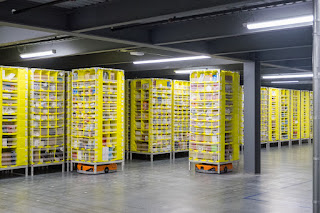 Amazon is turning heads yet again. This time, it is due to their $40 million dollar investment in their robotics hub. Amazon is looking into the future of automation and is working towards expanding their robotic technology.

Their new robotics hub will be located in Westborough, Massachusetts. This new facility is about 350,000 square feet and is set to open in 2021. Their goal of furthering their robotic automation is to increase efficiency, safety, and speed of delivery times, all while decreasing costs. It was stated that Amazon's packaging robots can pack 4-5 times faster than the average human packer. Although these robots have a hefty price tag of about $1 million each, Amazon believes these machines will pay for itself in less than 2 years. Amazon is currently concentrating a lot of their robotic efforts into packaging. This is a pilot, as Amazon looks to grow their use of robots.

Although Amazon primarily uses their robots for packaging, they are also used in other functions of the fulfillment process such as carrying inventory and transferring pallets. In addition to opening a robot friendly warehouse in Westborough, MA, Amazon is in the process of opening a new facility in Garner, NC. This facility is 2 million square feet and has dedicated about 700,000 square feet to its fulfillment center. Although it was not explicitly stated what roles the robots will have, it was mentioned they will retrieve inventory that is on the floor. This will decrease the time and energy spent by workers walking around this massive space, thus increasing efficiency.

Amazon has more than 100,000 robots spread across over 175 fulfillment centers and packaging and sorting facilities worldwide. The number of robots used are set to increase in the near future. Amazon is looking to develop new technologies which expand the tasks the robots are able to do. In addition to retrieving inventory from the floor and packing the products, robots are able to sort, stock, and scan packages.

In the near future, when Amazon significantly increases their robot usage, it will be interesting to see the results of this project. It will also be intriguing to see what capabilities and technologies are installed into these robots.
Facility Management, Trending