Sourcing, technology and the future of sustainable supply chains 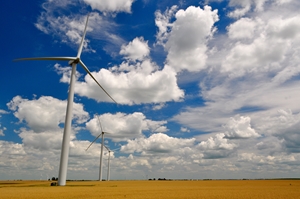 Global sourcing initiatives can go hand-in-hand with the desire to go green, as businesses use the latest data to save money while proceeding responsibly. With much of the year still ahead of us, it's still possible to estimate what the newest developments will be that steer sustainability efforts in the future.
Greener vessels
While reducing carbon emissions generated by fulfillment centers and land vehicles has gained much attention, sea vessels can also possibly play a role here. Supply Chain Dive recently reported on the future of wind as a power source for ships.
A key factor in determining whether or not this design will take off lies in the rotors used for upgraded ships. As the source said, retrofitting can be a serious expense in an industry already trying to keep costs manageable.
However, some argue that this trend is currently in development and could gain traction soon, at least in Europe. WorkBoat said that the vessel Viking Grace is set for an upgrade which would put wind-sensing systems on it by the end of next year. Even if options like this don't completely replace standard fuel for ships, they could at least add to existing systems as a kind of backup.
Harnessing AI
Artificial Intelligence represents a major possible boon to logistics, and businesses should also prepare for it to potentially help them reach green targets. As with auxiliary wind power, AI could be not a full replacement so much as a supplement to go alongside human intelligence.
Green Biz specifically wrote about this, saying there is a growing awareness of the possibilities in logistics. Automation, machine learning and self-sufficient systems could, at the very least, maintain consistency and respond to the latest observable data.
Whether or not it applies to sustainability, AI does seem to already have companies preparing for the future. Green Biz cited an Infosys survey which looked at the possible improvements coming with the AI revolution.
These include a 39 percent revenue increase three years from now, among organizations using or planning to use AI. The survey also found that 60 percent of decision-maker respondents plan to "invest in supporting IT infrastructure," laying the groundwork for further developments.
Broader sustainable sourcing
Industries from apparel to electronics are seeing the benefits of supply chain overhauls. Organic Monitor released its predictions for the cosmetics sector going forward this year, which include greater use of green materials, sustainable packaging and certification under "natural" and "organic labels.
Because of this, natural ingredient sourcing and the very means of measuring sustainability are also possible areas for growth as businesses seek to embrace better habits throughout their supply chains. These could end up being part of a larger movement to influence this sphere.
Other examples of responsible sourcing include Ralph Lauren Corporation: the clothing company is planning to change its own sourcing to have a better impact. Environmental Leader said that the business is planning to release updated "sourcing guidelines" later this year, as a sign of its commitment. This initial policy change could also be just the start of a greater shift, as the company said it will keep developing this plan, according to the source.
For Ralph Lauren, strategic sourcing means monitoring certain fabrics in its products. Fairphone, a smartphone company, said that certain minerals could be part of  supply chain improvement, according to Mobile World Live. These include copper, gold and tungsten.
Smart sourcing leaves multiple impacts
With low-cost country sourcing/nearshoring, businesses can work internationally and have the means to keep costs low. This could both benefit the immediate supply chain and create important links with trustworthy suppliers for the future. Deciding which companies to work with depends upon a long list of factors, including labor, local resources and the ultimate market.
Procurement News