Home IT How will wind, solar impact on fossil fuel procurement?

How will wind, solar impact on fossil fuel procurement? 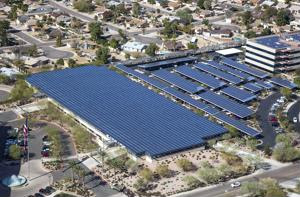 A decade ago, renewable energy adoption was quite lackluster - abominable in the eyes of many professionals subscribing to the green movement.

Now, a monumental shift is taking place on a global scale. In addition to environmental concerns, enterprises operating at different parts of the globe are investing in wind and solar energy to help them better achieve corporate cost reduction and develop a positive reputation.

Gaining favor among the masses

Whether business-to-business or business-to-consumer, companies are recognizing the value of green power investment. Enterprises like conducting transactions with counterparts that exercise best practices because it benefits their reputation.

Computer technology firms realize that it takes an enormous amount of energy to power their data centers. Those offering cloud services are subject to enormous utility bills, fueling their hubs with electricity produced by coal- and oil-fired power plants. GreenBiz noted that several software and hardware developers are mitigating this concern by investing in renewable resources:

Leveraging procurement services to obtain wind and solar technology is becoming a more prevalent practice. However, sourcing specialists are wondering how renewable power will impact the global distribution of power. Some professionals have been bold enough to assert that green implementations will render fossil fuels obsolete over the next couple of years.

Renew Economy spoke with Stanford University professor Tony Seba, who wrote 'Clean Disruption of Energy and Transportation." In his book, the expert asserts that Silicon Valley and the tech industry in general will be a catalyst for change.

"Clean energy (solar and wind) is free," wrote Seba, as quoted by the source."The key to the disruption of energy lies in the exponential cost and performance improvement of technologies that convert, manage, store, and share clean energy. The clean disruption is also about software and business model innovation."

Today, energy infrastructure is based on command-and-control models, subscribing to centralized operations. Seba maintained that future deployments will be distributed, intelligent and participatory.

No need for fossil fuel, nuclear

One of the key benefits of using wind and solar energy is that companies recognize that it's free. Setting up a complex, vast procurement process centered on obtaining natural gas, oil, nuclear assets and other similar resources will likely become outdated and unnecessary.

Seba exemplified the technology industry's contribution to this anticipated investment. Although cloud computing relies on the combined power of multiple data centers, servers and other such assets, it's still faced with an enormous power bill, which infringes on company revenue.

Imagine a cloud service provider builds a massive, 100,000 square foot data center in the middle of New Mexico. Lining the rooftop with solar panels and employing an advanced electricity storage system will result in greater profit margin. Why? Because the CSP isn't contracting a utility - which supplies energy produced by coal and oil - to provide power to its data center.

With that being said, it's important to recognize the marketing analysis Seba conducted in regard to utilities. Procuring tangible assets - transistors, substations, etc. - will grow unnecessary, because it's likely that solar technology will advance to the point in which buildings will not have to connect to the grid to supplement modest energy gains.

There's no denying the impact green energy will have on future markets. Although they've managed to survive, companies that have made a business of distributing fossil fuels will likely meet their demise.