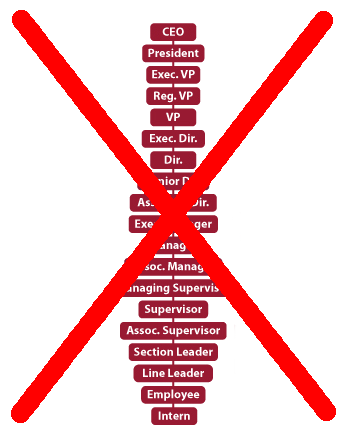 The fixing/overhaul of Healthcare.gov is a much better story than the botched launch. For one, the details of the website's botched launch have been beaten into the ground, and the lessons for the most part learned (like, vet your bidders on their ability to do the stated work, not win bids). But a really great Time article goes into how the website was saved, and the lessons are great - especially those concerning project management and how management gets in the way of a solid workflow.

The article is 14 pages long, and conceals some key lessons in its many deep dives. So here's a distillation of how a flat management structure helped overcome problems brought about, in part, by a vertical one, and the benefits/concerns.

G.S.D. means "Getting Stuff Done" or, if your office is a little more open, "Get S*** Done". In developing fixes for Healthcare.gov, the assembled team of specialists eschewed establish management structure and worked directly with the engineers of the firms responsible for the abomination that was the original Healthcare.gov site. Their reasoning? "If you can get the managers out of the way, the engineers will want to solve things."

The bosses and managers were turf conscious, more concerned with credit and accomplishments. When initial meetings were held after the site faltered at launch, management of the two firms bickered, shifted blame, ducked responsibility, and were more concerned with their professional reputations than the fact that their product was suffering and rapidly declining in the public eye. The engineers, on the other hand, were embarrassed and wanted to fix the problems.

By working directly with the engineers, the team of specialists avoided getting caught up in blame cycles and guarded turf. They could get stuff done.

The collected specialists first task was to decide whether the existing site could be saved, or if it had to be scrapped and a new one built. When going in to meet with the contractors responsible for the site's launch, and who would be working on the repairs or rebuild, the specialists looked for a willingness to cooperate and collaborate. In describing the scrap/save determination, Mike Abbott, one of the specialists and the man responsible for rescuing Twitter from frequent downtime in 2010, said "The first red flag you look for is whether there is a willingness by the people there to have outside help." Had there not been support, it would have been easier to build a new site as if the existing contractor was not cooperating. But instead, they found support and cooperation.

The teams were spread across several facilities, but communication was open and fluid. Each site had a "war room" with speakerphone on 24/7. It was an open phone line, a continuous conference call, and allowed the teams to speak easily and frequently, spurring the collaboration that was necessary to troubleshoot and problem solve.

Additionally, the project was focused and operated flat, meaning solutions were put together by who had the skills and/or information, not the title.

Meetings were minimal, and were "stand-ups". Stand-ups eschew the traditional sit-down-in-a-board-room meeting structure where the meeting leaders take in information then spew solutions. Instead, stand-ups (as the name suggests) involve meetings in open spaces where participants stand. Everyone reports any known issues, the group collaborates on solutions and delegation, the meeting breaks, and reconvenes in the evening.

In short, the project management takeaways can be summarized in a list of three rules developed by Google Engineer/Healthcare.gov Specialist Team Member and posted in each war room:

Shortened and generalized for every day, and not rescue/emergency situations, the list would read:

Could your organization work under these rules? Would you?
Facility Management