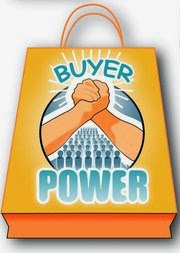 In business, one of the most important keys to success is to create a sustainable, hard to imitate competitive advantage. Porter's Five Forces, a common tool used in business strategy, gives the business world a guideline to identifying and/or creating this advantage. Two of the five forces speak about "power" as it relates to the buyer and the seller. When strategically sourcing in an effort to obtain better pricing, it’s all about power. In many instances, suppliers have the majority of the power in these negotiations because they are setting the prices and getting your business what is needed. Increasing your buyer power is a competitive advantage. There are ways to regain this power as a buyer that often lead to getting better deals on what you buy.

A tactic to getting better deals for your business is to leverage your spend. When the buyer has a large spend, they become a more attractive business partner to the supplier and therefore increase buyer power. Walmart is a perfect example of buyer power at its maximum. Due to their large spend; Walmart sets the prices on all of their purchases. If the supplier doesn't adhere to Walmart's pricing structure, they'll move their spend somewhere else. This replacement of a supplier is in many cases detrimental to the suppliers business.

One way to go about increasing your own organization's buyer power is to reduce fragmented buying. Fragmented buying is when a business is purchasing the same or similar items from multiple, similar suppliers. Your spend is being stretched too thin and, as a result, holds little weight with the individual suppliers. If you are negotiating pricing for a larger spend over less suppliers you have more power over pricing. Below you will find seven steps toward reducing this fragmentation and increasing your purchasing power.

Step 1:  Create Formal Categories for Your Spend
The first step to reducing fragmented spend is to generate some sort of categorization to organize your organization's spend. Many times this lack of spend categorization is what causes buying to be dispersed. For example, say your business buys keyboards (100 at a time) once per quarter. The first three times, Buyer A may categorize this as office supplies and therefore go to a supplier of office supplies where the keyboards are $100 each ($30,000 total). The last time, Buyer B may categorize this as electronics and go to an electronics supplier to purchase the keyboards at $70 each ($7,000 total). Lack of categorization and category confusion, resulted in a wastage of  $9,000 across first three purchases. More importantly, you may have been able to negotiate a better price on the keyboards, say $60 each, with the electronics supplier if you were buying 400 instead of 100. Categorizing spend reduces fragmentation

Step 2: Create Categories for Your Suppliers
The second step relates directly with the first. If keyboards are categorized as electronics and you have suppliers categorized the same way, this will help to match up opportunities and leverage spends with the correct suppliers. Similarly, categorizing suppliers reduces fragmentation.

Step 3: Narrow Down list of Suppliers You'd like to Bid on the Business
Once you have all your spend categories and the suppliers have been categorized, it's time to use judgment in narrowing down suppliers you'd like to re-negotiate pricing with. If you have $100,000 in your electronics spend category and you have 15 electric suppliers, you aren't leveraging your spend very well. Narrow down the number of suppliers based on specific qualifications that are important to your business (you may want to consider using a supplier scorecard with weights). Reducing the number of electric suppliers from 15 to five or even three will allow you to bring more potential spend to each supplier which will increase your power when negotiating on price.

Step 4: Assign Categories of Spend to Suppliers and Begin Bidding Process
Once you've consolidated your supplier list you can now send out request for proposals (RFPs) based on the categories. Make it a point to preface the discussion by telling suppliers you are now coming to them with a larger spend and expect better pricing.A desire to keep business away from a competitor can often be stronger than their willingness to negotiate.

Step 5: Review Bids
Once you've received the pricing back, review to identify supplier with best pricing. This is a way to gauge which supplier is providing the best deals.

Step 6: Renegotiate if Needed
You may need to go back to the supplier on certain items or categories if the deals aren't as good as you expected or to lock in the pricing for a certain period of time. Also, after comparing the bids from different suppliers, you now have a new baseline (lowest bid) and can now give other suppliers the opportunity to beat/match the lowest bid.

Step 7: Award Business
The final step is to award the business to the chosen supplier(s).

Eliminating fragmentation in your spend starts with categorization and may involve supplier score cards in addition to multiple rounds of bidding. The process will allow you to increase buyer power in an effort to get better deals on what you buy for your business. You may not always get a better piece price but on aggregate, you are guaranteed to negotiate better deals with the majority of suppliers if you bring them more spend.