Unknown on Tuesday, December 17, 2013 IT,
If you thought Google’s foresight was uncanny before, you might be downright scared to learn they’re buying up robot firms left and right. Just when people thought the capabilities of location recognition freaked them out, Google bought a military robot company and leaves many puzzled on how any of these super-bots will fit into their focus. It would make sense if this technology was centered on intelligence seeking; however Forbes points out these robots boast capabilities like hurling cinderblocks 17 feet and outrunning Jamaican Olympian runner, Usain Bolt. John Markoff of the New York Times claims, “The deal is also the clearest indication yet that Google is intent on building a new class of autonomous systems that might do anything from warehouse work to package delivery and even elder care.” 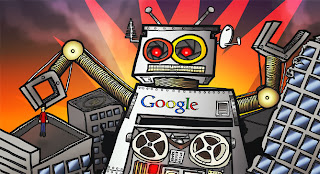 As critics point out, it seems ironic that within Google’s mission-type statement known as “Ten things we know to be true,” the company asserts “It’s best to do one thing really, really well.” In Google’s defense, the third point of the ten emphasizes “Fast is better than slow” and any aid in the company’s efficiency aside from searching itself, can be helpful—even if it is a robot making the changes. CEO Larry Page seeks to free humans from repetition and there is high probability that these bots can be the answer.

One unique portion of the recently acquired robots firm, Boston Dynamics’ business, is the company’s development of tools for human simulation. Although it was only exercised in military applications during its time with Boston Dynamics, there is the potential for uses in functions like self-operated cars and endless smart technology applications.

Although no one knows the real future of these speculations, Google can freely use profits to research into these areas, even if it is outside their scope of business. The risk of a pursued technology not being useful is a price Google is willing to pay for the chance of a ground-breaking redefinition of the company. Until then, it is amazing to watch what these robots are capable of on Boston Dynamics YouTube channel.

Photo Courtesy of: modernl.com
IT