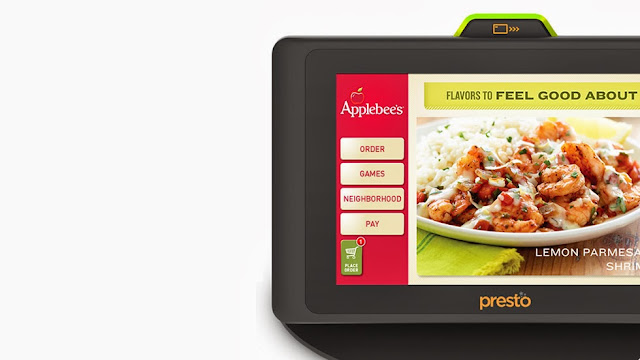 Applebee's recently announced a plan to automate ordering at its nearly 2,000 restaurants across the U.S. The announcement comes nearly three months after fast-casual rival Chili's announced a similar plan. Both restaurants plan to place tablet-style computers -- Android powered, but as durable and securely-mounted as the POS card readers at cash registers -- at each dining table, providing extra benefits to their customers, cutting costs, and driving up sales

- The tablets speed up the payment portion of a dining transaction. That familiar feeling of abandonment when the waiter or waitress disappears off the face of the earth when you're trying to leave? Gone. The tablets come fitted with card readers, allowing for payment the moment you're ready to leave.

- The tablets increase coffee and dessert sales for restaurants. Typically considered only at the end of the meal, after waiting for the wait staff to appear from whatever depths they disappeared into (see above), the tablets make dessert purchases an on-demand thing, so that Choco-splosion Lava Cake Sundae with Cheesecake Bites is all the more difficult to resist at $5.95. In test runs at select Chili's locations, the tablets increased per-person dollar amounts per check.

- The tablets generate money! The tablets are loaded with family-friendly games that, for a price, and offer some table-top entertainment for bored folks waiting for dinner.

There is a concern that, like other automation steps, these tablets can cut out human employees. Right now, unless the chains resort to conveyor belts, counter service, or convert themselves into automats, humans are still going to be required to cook the food, deliver it to the table, and make sure everything's cleaned up.
Best Practices, HR