Home Unlabelled Amazon Drone: Not Yet Flown Nor Accident Prone

Amazon Drone: Not Yet Flown Nor Accident Prone

Unknown on Friday, December 06, 2013
With Amazon CEO Jeff Bezos’ statements regarding the company’s future of drone delivery stoking everyone’s imaginations with the promise of 30-minute doorstep deliveries, it’s important to not get caught up in the fantasy. While this type of innovative product could certainly aid in the streamlining of supply chains and improving efficiencies, note that UPS also has tested these technologies, but did not share their developments with the public due to the colossal challenges ahead. While drone delivery plans are no doubt exciting, whether they are worthwhile is still very much, pardon the pun, up in the air.

From a financial standpoint, the issues stemming from air rights are enough to eliminate a lot of appeal for the company when they consider the profitability of their operations. As innovative as the plan is, it may become an overwhelming expense for Amazon with the need for air rights in the large cities where distribution sites will be located. “Typical air rights values are worth about 60 percent of comparable land values,” said Robert Von Ancken, executive managing director at Grubb & Ellis’ valuation and advisory group, as mentioned in The Real Deal. “But clearly they can differ given the desirability of the land.” Although, a startup in Palo Alto, California, named Matternet tested drones to send supplies to refugee camps in Haiti and found it cost only 20 to 70 cents to deliver a two-kilogram package 10 kilometers—offering approximately five times the savings of a standard truck delivery. In the case of Amazon, the circumstances are varied to say the least. R. John Hansman, a professor of aeronautics at MIT, points out in the MIT Technology Review, “They will have to charge a significant premium for this kind of delivery, so the products would need to be worth a $100 to $200 delivery fee for a five-pound or so package.” 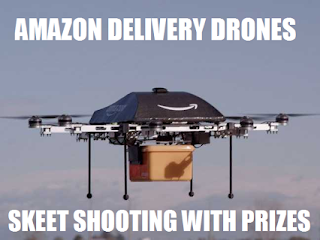 Since air rights prices are commonly negotiable, there are cost-savings opportunities available for this aspect of the drone delivery. Since the purchasing of these rights is somewhat a monopoly (the FAA has the sole authority to control all airspace), selecting the lowest-cost supplier would not be the way to reducing spend. However, negotiation of price with the FAA and is a definite area of potential.

Aside from the financial implications, there is a lot of necessary incident planning for inclement weather, power lines, or potentially damaging property. CNN jokes that some people may even be tempted to make games to hit drones and score points among friends. One main hindrance involves the Federal Aviation Administration (FAA) and their ban of commercial use of drones except for one Arctic commercial operator.

Even if these challenges are met, in the United States, drone use by Amazon would likely be a niche, high-cost service for high-value items. The FAA is currently working on drone safety and usage rules that are supposed to take effect in 2015. The rules are expected to lead to new commercial uses, allowing this service to become legal for Amazon.