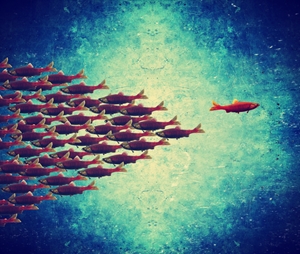 Supply chain changes can take curious routes. While many might guess that the fish in the seafood market come from areas near water, Mother Jones reported on VeroBlue Farms, a "fish farm" in land-locked Iowa dedicated to raising barramundi fish.

Despite the obvious challenges, this site seems to hold some advantage for the company. The source did admit that running a fishery on land requires 15,000 gallons of water a day, at least at the VeroBlue location. What's more, as consumer tastes have drifted to organic and free-range farming practices, the idea of fish culled from such a facility rather than the Pacific Ocean may seem unappetizing.

Against these arguments are some powerful pros. According to the article, the barramundi fish don't receive any antibiotics and require less food than salmon. Even if this particular breed hasn't caught in with the mainstream yet, some food-world influencers could, thereby increasing demand.
Iowa already has a strong farming culture, which could provide a surprisingly good background for the new fish tanks. If other meat producers learn to see fish farmers as an add--on to their existing operations, it could start a new trend for other companies to follow.

Barramundi may be waiting in the wings, but these land-farming practices could also work for the ever-popular salmon. In 2015, National Geographic wrote about "the fish farm of the future" in British Columbia. This referred to the Kuterra farm, a large indoor pool owned by the Namgis First Nation and perhaps setting a standard for large-scale, sustainable indoor fish farming.

Kuterra spokeswoman Jo Mrozewski told the source that the facility allows for better environmental management than would happen in the wild.

"The one word that best describes what we're doing here is 'control,'" Mrozewski said. "You control the environment, you control the growth parameters. You can control so many things because you're not exposed to the vagaries of nature."

At the time of writing, Kuterra hadn't actually made a profit yet, despite securing millions in funding.

The need for smart sourcing

Like many other industries, seafood shows us the importance of strategic sourcing. In addition to the already mentioned challenges, the following issues will also probably continue to impact seafood suppliers:
Global sourcing may help businesses improve on these fronts while keeping these elements alive as well.
Procurement News